The opening event of then 2010 ASP World Tour season, the Quiksilver Pro Gold Coast started the year off with a bang, bringing the greatest assemblage of surfing talent in history to one of the most iconic pointbreaks in the world, and the world’s best surfers shattered high-performance barriers once again.

“I’m so so happy right now – it’s the best feeling on Earth!” Burrow said. “It’s unreal. I have a good group of friends with me and my parents are here supporting me. To have everyone cheering me on in the final is really really special.”

While the young South African led throughout the first half of the 40-minute Final, it was Burrow who changed the tide with a mid-heat assault, racking up several solid scores in larger set waves amidst the deteriorating conditions.

“I didn’t feel like I surfed my best in the Final,” Burrow said. “I kind of just did what it took to win. I just waited for the best waves, did a couple nice turns - nothing too wild. I’d rather have taken Jordy’s approach - catch lots of waves and just let loose. That’s kind of my strategy normally, but it worked fine. Being a bit more patient and selective than usual definitely paid off. But I knew Jordy could unleash and get the big score any moment.”

Burrow, who has secured victories in the previous two events entered (Pipeline in December and Burleigh Heads in February), has been in sensational form over the past three months, and will look to continue the momentum in 2010 as he hunts down his first ASP World Title.

“What can I say? I don’t know,” Burrow said. “I surprised myself really. Obviously, Pipe was the biggest event I could ever win. I was just overwhelmed. I felt like retiring after that event. I just couldn’t believe it, and didn’t think it could get any better. I guess I’ve taken the confidence from it and worked on some good boards. Burleigh Heads was a good warm-up. I felt good that there as well – there are fun little rights, and then here, I took a while to get rolling, but I just built up momentum. I felt great out there and here I am on the podium again - it just feels unbelievable.”

Smith, who went on a giant-killing spree at the event, eliminating former nine-time ASP World Champion Kelly Slater (USA), 38, in yesterday’s Round 4 before posting the best result of his young career.

“It’s my first Final so I’m pretty stoked,” Smith said. “It’s unfortunate that the waves went kind of dead in our heat there, but we tried our best. It’s been a great event though and I’m looking forward to the next one.”

Long touted as one of the most dominant forces in the surfing world, Smith had yet to realize his potential in the competitive realm, but if this event’s performance is any indication, the powerful natural-footer is a near-certain threat for an ASP World Title.

“I just feel a lot more comfortable with myself this season,” Smith said. “I’m having a lot more fun with my surfing and everything seems to be coming together for me. I’m amped with a Runner-Up finish here and hope I can keep the momentum up for the rest of the season.”

Dane Reynolds (USA), 24, looked the form surfer of the event yesterday, defeating defending event winner Joel Parkinson (AUS), 28, with an impressive 19.20 out of a possible 20. However, the young Californian was unable to find a rhythm in today’s challenging conditions, bowing out of the event with an Equal 3rd at the hands of Smith.

“I felt pretty good yesterday and it felt like my equipment was finally working,” Reynolds said. “Even though the conditions weren’t as good today, I thought I could catch an average wave and surf it well enough to get a good score, but that didn’t happen. When the other guy gets a good roll going, it’s hard to come back – or it is for me anyway.”

With his penchant for churning out Earth-shattering performances and a good start to the year, several pundits are considering Reynolds as a legitimate ASP World Title contender, but the humble natural-footer has yet to commit such a goal.

“I’ve never been in this situation before so it’s hard for me to say (in regards to motivation for the ASP World Title),” Reynolds said. “When you’re a little kid, everyone always tells you that the ASP World Title is the goal, but there’s only one each season and 45 guys going for it. It hasn’t been a goal for me yet.”

Bobby Martinez (USA), 27, matched his best result on the Gold Coast today, collecting an Equal 3rd (his first in 2006), but the sole goofy-footer in today’s event was clearly upset about the deteriorated conditions.

“It’s disappointing to finish when it’s windy like this today,” Martinez said. “We all want to surf when it’s glassy, and I’m disappointed that we have to finish today. I did my best to mix it up out there, but it’s very challenging out there on your backhand today.”

Highlights from the Quiksilver Pro Gold Coast presented by Land Rover can be found via www.quiksilverpro.com.au 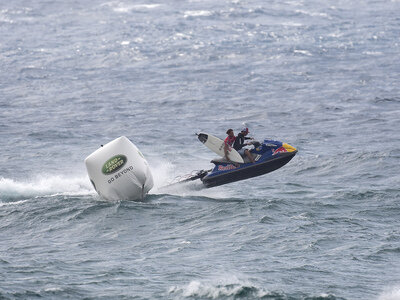 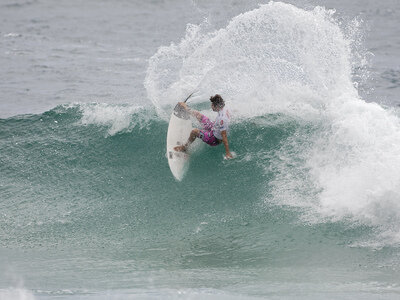 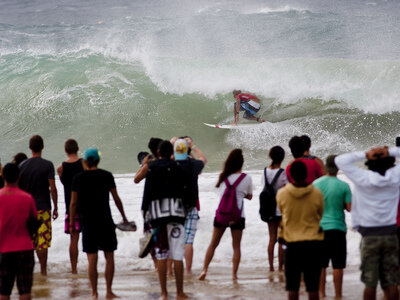 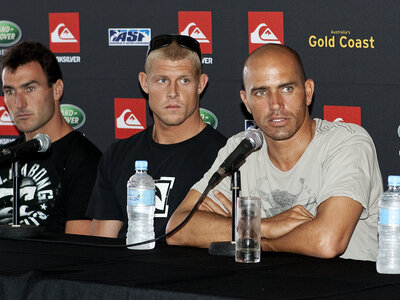 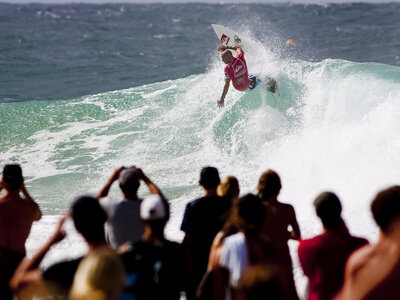 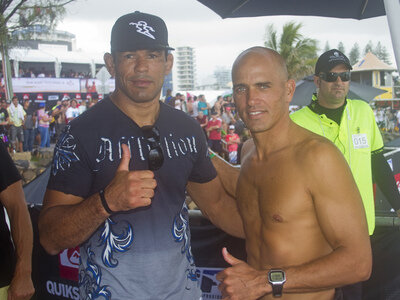