Event No. 9 of 10 on the 2009 ASP World Tour, the Rip Curl Pro Search ran a gamut of conditions and venues ranging from two-foot righthand wedges at Molhe Leste, four-foot offshore lefthanders at Lagido, punchy four-foot peaks at Belgas and death-defying six-to-eight foot barrels at Supertubos yesterday before culminating a dramatic end to competition.

Fanning, who won the inaugural Rip Curl Pro Search at Reunion Island (2005) and was a standout in yesterday’s massive barrels, readjusted to today’s smaller conditions and was dominant in his Final against Durbidge. With conditions deteriorating, Fanning lacerated the punchy wedges on his forehand to net a solid 6.67 and a 6.00 that would prove unbeatable for his opponent.

“Yesterday was one of the best days of competition I’ve ever seen and we all showed up today and had to adjust our frame of mind to deal with the drop in size and quality,” Fanning said. “I’ve been surfing conditions like this all summer at home so I knew what I had to do out there. I was able to pick off a couple of good scores at the start and then I basically had to sit on Bede (Durbidge) so he didn’t get any back on me.”

A true student of focus and adaptability, Fanning was a fitting champion of the Rip Curl Pro Search, and navigating the changing venues and conditions with aplomb and panache.

“The Search lived up to its name – we searched everywhere,” Fanning said. “We surfed four different waves for the event and even yesterday, I wanted to go and surf down at the wall, but we ran here and it ended up being one of the best days of the year. Congratulations to Rip Curl and all the staff who put in some really tough work all week with all the moves – it’s been a pretty amazing effort.”

The Rip Curl Pro Search narrowed down the field of potential contenders for the 2009 ASP World Title from 10 to two throughout the course of the event, with the final event of the year at the Banzai Pipeline playing the decider.

“That’s what you always dream of as a kid (competing for an ASP World Title at Pipeline),” Fanning said. “I’m super pumped. I’m going to go home and relax for a couple of weeks and get ready for Pipe. Hopefully we get some big barrels like we did here and we have a real showdown.”

Durbidge, who now moves to ASP World No. 4 heading into the final event of the season, was a standout throughout the Rip Curl Pro Search, likening the conditions to his home break of North Stradbroke Island on Australia’s Gold Coast. The well-built natural-footer secured an impressive come-from-behind win in his Semifinal today before being stopped by Fanning in the Final.

“Definitely the top guys of the event were in the top four,” Durbidge said. “It was unfortunate that Owen (Wright) couldn’t be in his Semifinal. Mick (Fanning) has been in incredible form the past eight weeks and he’s on fire. The 10 that Joel (Parkinson) got yesterday was phenomenal, and in our heat this morning, he had me on the ropes until the end.”

The Runner-Up finish marks Durbidge’s second of the season (collecting his first in France), and is a welcome change in momentum from a tough start to 2009. A former winner at the Billabong Pipeline Masters (2007) as well as a former Vans Triple Crown Champion (2007), Durbidge will look to finish the year strong in Hawaii.

“I’m stoked to get second but you always want to win,” Durbidge said. “I have that little bit of disappointment. It was a great event for me and I won some really big heats so the confidence is really high. I love Hawaii and I haven’t had my win this season yet so I’m definitely keen to put one away during the final event.”

However, tragedy would strike during his Quarterfinal win over Hobgood yesterday as the phenomenal goofy-footer suffered a horrific wipeout, rupturing his eardrum and injuring his neck. Although prepared to don a helmet this morning and take on the current ASP World No. 1, event physicians instructed the young Australian against competing.
”I had the injury checked out last night – there’s no real bone or structural damage,” Wright said. “I just feel it through the neck, shoulder, knee and my ear is a bit messed up. We did some tests this morning and we all decided it was better off me not competing as I don’t really have much range in my neck movement. But, it’s all good – it is all fixable. I will be getting worked on twice a day and I will take a bit of time to relax. I will still go to Hawaii and hopefully get some barrels. I love it there so hopefully we get a good season.”

Although Wright was unable to surf on the final day of competition, he emphatically made his presence felt amongst the world’s best and will be a force to be reckoned with on the 2010 ASP World Tour.

“I’m definitely disappointed but stoked to see Mick (Fanning) win,” Wright said. “Stoked he got another win. I would have loved to have surfed against him, it would have been great, but I’m really happy with my performance in Portugal. It was a great experience and gave me a lot of confidence heading into next year.”

Parkinson, who experienced what many considered to be an unbeatable start to the 2009 ASP Dream Tour season, witnessed his stranglehold on the ratings chipped away at following three, consecutive Equal 17ths sustained in California, France and Spain. Despite missing out on a Final’s berth, Parkinson’s Equal 3rd place finish is a welcome return to form.

Generally guarded when discussing the 2009 ASP World Title race, Parkinson is one of two contenders remaining this season, and, as the defending Vans Triple Crown Champion, will be a major player in the final event of the year.

“In a few days when all the dust settles I’ll look back and see that I have come off the ankle injury and a few bad results, so just to get a third and back into form is a huge confidence boost,” Parkinson said. “There is not a great deal of points between me and Mick (Fanning) coming into Pipe so it’s still anybody’s to win.”

Although the men’s event has concluded, the ASP Top 17 will have their crack at the many waves of Portugal for the Rip Curl Women’s Pro Search, event No. 4 of 7 on the 2009 ASP Women’s World Tour, which will commence this afternoon.

Surfline, official forecasters for the 2009 Rip Curl Pro Search, are calling for the current surf to drop slightly over the next 24 hours before another swell is expected to hit the region. 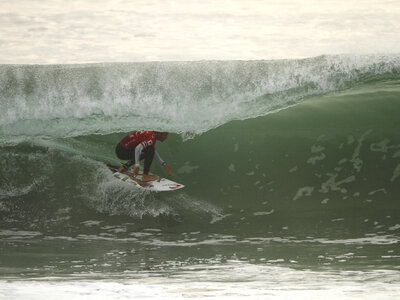 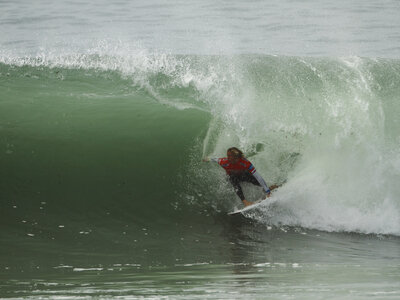 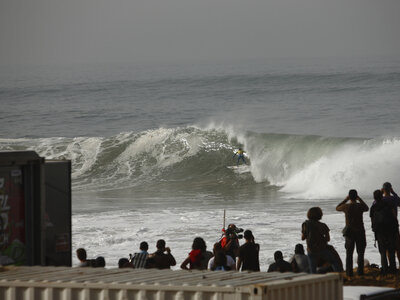 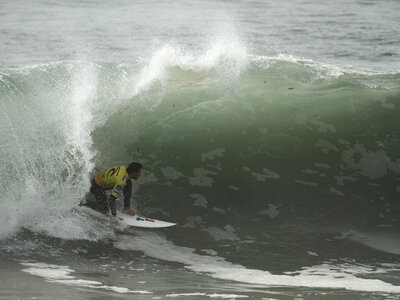 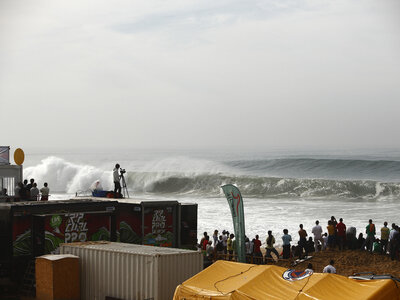 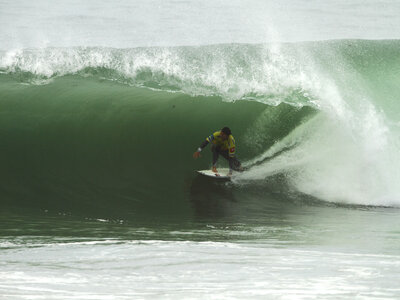 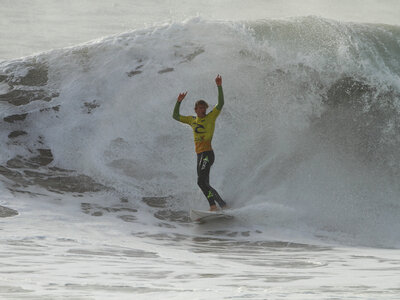 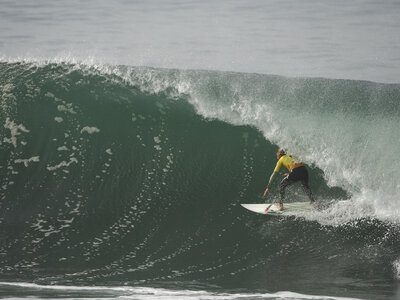