TAVARUA, Fiji (Friday, June 17, 2016) – Gabriel Medina (BRA), 2014 WSL Champion, claimed an emphatic victory today at the Fiji Pro, besting current Jeep WSL Frontrunner Matt Wilkinson (AUS) in solid 10-to-12 foot (3 - 3.5 metre) surf at the world-renowned Cloudbreak. Stop No. 5 of 11 on the 2016 Samsung Galaxy WSL Championship Tour, the Fiji Pro, culminated in dramatic fashion today with the remaining members of the world’s best surfers battling one another in the largest surf of the year.

Following a slow start, with both Finalists finding themselves out of position in the building swell, Medina struck with two back-to-back scores for impeccably-navigated tube rides, posting a 7.33 and a 8.27 to place Wilkinson into a combination situation. The Australian was unable to find a rhythm in the challenging conditions and Medina posted his first elite tour win since last October.

“It feels amazing and I am so stoked,” Medina said. “I just want to thank God and my family. That was a crazy week. We have been waiting for these waves and they finally came through. They were big and we got so many sets on the head. We got a lot of barrels and it was a sick event. I am just so happy.”

Today’s victory rockets the Brazilian to second on the WSL Jeep Leaderboard heading into the back half of the season.

“I am really tired right now, but I was saving my energy for the Final because I knew it would be tough,” continued Medina. “Wilko (Matt Wilkinson) has been surfing amazing since the first event and I do not know who can stop this guy. This is his third final of the year and I am really happy to make this final against him.”

Today’s second place finish strengthens Wilkinson’s lead on the WSL Jeep Rankings and the Australian will retain the Leaders’ Jersey heading into the J-Bay Open with a commanding 32,500 points. The Fiji Pro marks Wilkinson’s third Finals appearance in 2016, after his back-to-back wins on the Gold Coast and at Bells Beach.

“I am really stoked with second,” Wilkinson said. “If I came here knowing I would get a second, I would have been absolutely frothing. That Final was just so tough. It was disappointing not to get a big barrel when there were some to be had out there, but I just had twenty sets on the head and one barrel that I got caught in. Gabriel (Medina) was unbelievable out there. It is halfway through the year and I could not have dreamed of a better start. Everyone is obviously going to be coming for me, so it is definitely not time to let off on the accelerator. I am going to go into J-Bay as focused and ready as I can.”

Adrian Buchan (AUS) defeated three-time WSL Champion Mick Fanning (AUS) in the Quarterfinals before being eliminated by Wilkinson in the Semifinals. Buchan’s 3rd place finish is his best result in 2016 and his first Semifinal berth since Jeffreys Bay in 2015. Buchan was previously in 15th place on the Jeep Leaderboard and will now move to 7th.

“I’m pretty gutted right now,” Buchan said. “I spent the whole heat duck diving washed through sets. I fought back with that 7.8 midway through the heat and I just couldn’t get deep enough on that 4.1. I spent the last six minutes dodging wash-throughs again. That was frustrating, but you can’t get mad at the ocean. I’ve been pretty in rhythm all event and that heat I was completely out of rhythm. It was amazing to surf a heat against Matt (Wilkinson), but it just hurts when you are in rhythm and you have a heat like that.”

Fanning’s Quarterfinal berth earns him a fifth-place finish and sees him move to 16th place on the Jeep Leaderboard.

“It’s been an incredible event,” Fanning said. “Celebrating Taj’s final CT appearance, having a birthday, ending in pumping surf and just having a great time has made it a really special event. I appreciate all the support I’ve had throughout the window and will see everyone in Jeffreys Bay.”

Today’s Semifinal berth for Kelly Slater (USA) marks a great result for the 11-time WSL Champion, and his first Semifinal since Jeffreys Bay in 2015, after his worst ever start on the Championship Tour. During the match-up, Slater exchanged strong opening rides with Media, but the Brazilian got the edge with an excellent 8.40 over Slater’s 6.50. As sets rolled in, Medina continued to increase his lead with a 6.27. In the dying minutes of the heat, one last opportunity came through for Slater, but Medina utilized his priority to block the four-time event winner. En route to the Semifinal, Slater unleashed incredible performances including a near perfect 19.77, the highest heat total of the event. Slater will leave Fiji with a 3rd place finish and move up to 26th place on the Jeep Leaderboard.

“I am happy because I surfed well in this contest,” Slater said. “I feel like I finally got the computer working in my brain again, but I caught a couple of viruses in that heat. I probably got a little ahead of myself. I might have gotten a little too excited from the last heat and a couple of heats before that. You just have to focus on the job at hand. Gabriel (Medina) picked it right and played the heat the right way. I had my chances and made three or four mistakes. I am looking forward to J-Bay.”

John John Florence (HAW) battled eventual runner-up Wilkinson in Quarterfinal 4 but wasn’t able to take down the Australian and takes home a 5th place finish. Florence secured a solid 6.50 on his opening ride, but Wilkinson quickly captured the lead with a 7.73 and 6.90. Florence, with a 10.93 heat score, was not able to close the 8.13 point gap against Wilkinson. Florence remains in third place on the Jeep Rankings.

“The waves are really good right now and I just did not pick the best waves,” Florence said. “I had that one at the end but I was a couple feet too deep. This result is not too bad, it is still a keeper and it's only halfway through the year. I am pretty excited for J-Bay. All in all, I am pretty stoked. I had some really great waves in Fiji.”

Adriano de Souza (BRA) was dispatched by Medina in the opening Quarterfinal. Medina locked in multiple maneuvers to earn a 6.33 to take control. De Souza battled with a 5.83, but could not find a strong enough back-up score to defeat Medina. Medina scored a 4.53 to gain a 2.03 point lead to eliminate the reigning World Champion from the event. De Souza will walk away with a 5th place finish and 5th on the Jeep Rankings.

“It was a tough day out there for me,” De Souza said. “I got so many waves on my head and a broken board. Gabriel (Medina) has so many skills and he is so smart and picked the right waves. Right at the end one wave came through. Needing a 5, I tried to get deeper and then that cost me to not make it through the last wave. I am just happy to be in the Quarters, as it is a good result when looking at the full year. Now I am focusing on J-Bay. Before that I will stay here another week and get more barrels.” 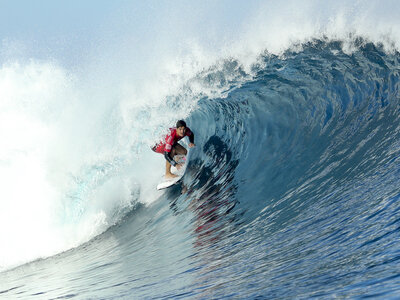