An elite tour competitor since 2011, Wright’s clinching of her maiden world surfing crown today comes after an emotional year with her family and four elite Championship Tour wins this season.

“A lot has gone into this, a lot of hours and a lot of moments,” said Wright. “There are a lot of reasons why I set out the win this World Title this year and a lot of reasons that I did not mention to the public. Last year was such a hectic year -- I lost an uncle and this was the last event that he ever saw me compete in. A lot of emotional moments, but pretty much from that moment I promised him that I would win a World Title and I did. It’s in his honor and my brother’s honor and my whole entire family and the community I come from. So many things happened this year and my personal life hasn’t been easy. Owen and my family and my mom -- I just love them so much and to be able to do it for them is very special.”

“I’ve always known I could do this and this year I was ready,” continued Wright. “A massive congrats to Courtney (Conlogue). I’ve been in her position twice now and I know what it’s like. I love her, I love the way she competes and she’s such a strong competitor. A big thank you to everyone that’s come before me and paved the way. Carissa (Moore) is a huge inspiration -- she’s the progressor of this sport so to be in final with her was really special. Thank you to her!”

The win today for three-time WSL Champion Moore is her first ever CT victory in France and her first of the 2016 season. Moore remains in third place on the Jeep Leaderboard heading into the final event of the year in Maui.

“I’m so stoked, it’s been an incredible day, I’m so happy for Tyler (Wright) and Courtney (Conlogue), they’ve had an incredible race until France and it was nice to share the final with Tyler,” Moore stated. “I’m over the moon to see Keanu (Asing) in the final, he’s such a good human, he wears his heart on the sleeves and we’ve been friends since we were little. I actually have to thank him for pushing me to be where I am today. I want to thank my family and everyone at home for staying up countless nights.”

The Final of the the Roxy Pro France saw Moore take on newly crowned World Champion Wright. Moore, who has stood out throughout the entire event, wasted no time to post an authoritative 7.33 to take an early lead and fired again with a near-perfect 9.03 to put the Australian in a combination situation. With time winding down, Wright was not able to turn in the scores to defeat Moore. The two World Champions have previously matched up seventeen times, and this win marks Moore’s twelfth victory over Wright.

World No. 2 Courtney Conlogue’s (USA) campaign for a maiden WSL Title was halted by eventual winner Moore in their Semifinal bout, as the Hawaiian asserted her dominance and set out to destroy every wave that came by. Conlogue battled for a comeback but wasn’t able to find the opportunity to better Moore, who held her off with an excellent 8.90 to put her in a combination with less than five minutes remaining. Conlogue answered quickly for her best score and was left with three minutes to hunt down an 8.01. The American gave her all on a final wave and left the water to await the score, which wasn’t enough and she finishes in Equal 3rd.

“That last heat was definitely really tough,” Conlogue said. “I gave it my all but Carissa’s (Moore) been on point this whole event. Huge congrats to Tyler (Wright). She’s had a very consistent season with her winning the title, and I’m very happy for her. You have to pick yourself up and keep moving forward. Obviously I’m really looking forward to Honolua -- we still have one event left. Now I just get to have fun for the rest of the season and regroup to 2017. The next step is the World Title and I’m one step closer being No. 2.”

In the opening Semifinal Tatiana Weston-Webb (HAW) was eliminated by Wright in a rematch of last year’s Roxy Pro Final. The young Hawaiian couldn’t match Wright’s flow and radical attack on the long lefts of Guardians and finishes the event in Equal 3rd place. Stopped in the Semifinals for the third time this season, the former Rookie of the Year adds another amazing result to her 2016 campaign and will stay in 4th on the Jeep Leaderboard.

On the men's side Asing took down defending event winner and 2014 WSL Champion Gabriel Medina (BRA) in the Quiksilver Pro France Final to claim his maiden Championship Tour win and leap up thirteen places to 21st on the Jeep Leaderboard.

“I’m stoked and this is a dream come true,” said Asing. “The work’s not done yet but I hope I did something good for John (Florence) maybe and helped him with the title race. I’m over the moon -- it’s so surreal. I’m super happy and I feel like I’m dreaming right now. I’m stoked to see my other Hawaiian competitor and childhood friend, Carissa (Moore), also win. I’ve never even made a QS (Qualifying Series) final so this is crazy. Having all my friends on the beach is even more ridiculously unbelievable.”

“Every time I put on a jersey it’s to do one thing and that’s to win,” continued Asing. “The last time I won a contest is probably when I was a junior so it’s crazy to come here and win my first CT event. Competing with Kolohe (Andino), and John and Gabby (Medina) and all these guys is unbelievable. The competitive spirit that we all have and share is over the moon and really pushes me hard.”

The young Hawaiian unleashed forceful backhand maneuvers to put pressure on the Brazilian powerhouse. With five minutes left, Asing put Medina in a combination situation to challenge Medina to turn in two new scores. A 5.90 on Medina’s eleventh exchange bettered his situation, only requiring an 8.04 to counter. An interference penalty called on Medina in the last minute disqualified one of his wave scores, solidifying Asing’s win.

“I love France -- it’s been a good place for me,” said Medina. “I’m happy with second, I would be more happy if I won but I think second is good. It’s been a good warm up for Portugal. Congrats to Carissa (Moore) and Keanu (Asing). I know the feeling to win your first event so I think he’s really happy right now. They both deserve it and of course Tyler (Wright). I feel very proud of her and I know Owen (Wright) must be very proud too. It feels good to be closer to John John (Florence) so -- never give up!”

The all-Hawaiian Semifinal matchup witnessed a heated battle between John John Florence (HAW) and eventual winner Asing. With an opportunity to strengthen his World Title campaign for Florence, and requalification on the line for Asing, both surfers charged through the heat with excellent rides. Asing barely edged out Florence by 0.87 with his 16.94 combined heat score. Florence’s run in France will end with an Equal 3rd place finish and while the Hawaiian keeps retains pole position on the Jeep Leaderboard, the gap has now shrunk to only 2,700 points between him and Medina.

Kolohe Andino (USA) couldn’t quite rival Medina’s flair on the lefts of Guardians, and despite excellent efforts on multiple waves, ended his Semifinal in a combination situation. Currently in his best season amongst the Elite Top 34, the Californian claims an Equal 3rd place and the allocated 6,500 ranking points to move up to 5th on the Jeep Leaderboard.

“I’m stoked, I think I’m fifth now and I hope I can stay up over that range for a good seeding next year,” Andino said. “I definitely would have liked to have won an event, but two more left so I’ll see what I can do. Surfing is a unique sport, I think the final day has got to be your day, today’s was Keanu (Asing). I felt like I was surfing my best but I had a hard time finding good waves through that heat. I’ve never really done well at Pipe so this year I want to prove to myself that I can, so that if next year I’m in the title race I’ll be able to bank off that.”

The next stop on the 2016 Samsung Galaxy WSL Championship Tour for the men will be the MEO Rip Curl Pro Portugal from October 18 - 29, 2016 while the women will culminate their season with the Maui Women’s Pro from November 23 - December 5, 2016. 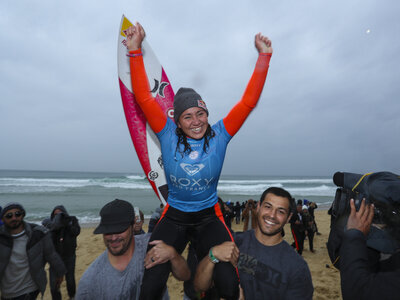 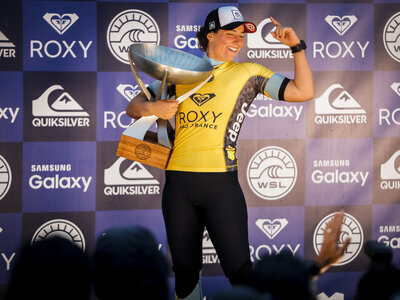