A near perfect performance from Wilson left no chance for his younger opponent to build a challenge in excellent 4-5ft (1.2m) wrapping right-handers at the main event site of Ribera D'Ilhas.

Wilson looked ominous heading into the final with his momentum and confidence growing with each heat appearance. Repeating his semi-final game plan, Wilson racked up two excellent scores in the opening minutes to place all the pressure on his opponent.

“I am so happy. To put in the hard yards for this one has been unreal. I have had a mediocre start to my year and I have been working so hard to make some heats. I came off four weeks in Brazil without a strong result and I went home to reassess and do a bit of training and got really motivated. I flew over here by myself with just the goal of winning and stayed focused so it worked out.”

Wilson left his best surfing for the final with an impressive mix of fins-out snaps, floaters and power rail-turns to further his lead with a near perfect 9.8 out of 10, the highest single-wave score of the event. To finish off, Wilson hooked into another bomb set to continue his dominance to claim a 9.57 and take the Quiksilver Pro Portugal 2011 title.

“I felt good right from the start when in my first heat of the contest I had a 9 and an 8 and I felt comfortable out there. I never went too much out of my comfort zone and just surfed strong and made sure I was winning heats because I wanted to win this event. I was going to do whatever it took to do it.”

“The waves have been fun all week,” continued Wilson. “I have been surprised at the waves we got because everyone was saying at this time of year it would be small. We have scored with waves, weather, the people are really supportive and you can tell they really love watching surfing. I think it’s cool when they get right behind us.”

Gabriel Medina finished runner-up and added another great result to his already excellent season and continues on course to enter the elite ASP World Tour when the midyear cut takes place. Medina showed signs of repeating his recent PRIME victory in Brazil as he cruised through his quarter and semi-final with numerous excellent scores to take on the role as favourite. The backhand approach of Medina was sharp and fast on the long peeling right-handers with savage hooks in the most critical sections of the wave.

“I could not find a good one in the final but I am happy with this result. Julian got two 9’s in the final and he surfed really well so congratulations to him. Now I head to my next event in a couple of weeks in Ballito, South Africa and I hope I can do well there like I have done here.”

Miguel Pupo (BRA) 19, in semi nº2, was unable to hold back a rampaging Julian Wilson who got off to a lightening quick start to rack up two excellent scoring rides and put the young Brazilian on the ropes. Despite answering back with a combination of backhand gouges to score 7.87 out of 10, Pupo was left needing a near perfect score to oust the Australian.

“It is a good result but I wanted to make the final. Julian (Wilson) had a quick start and then I was trying to get a good wave but it was bad luck for me. I caught a pretty good one but I fell on the second turn. You never know when the good wave is going to come and Julian did his job well. It is time now to think about the mistakes and go for the next contest.”

Pupo has added to his best results of the year to take one step close to qualifying for the elite ASP World Tour. The added points will edge Pupo higher on the rankings to distance him from the 32-man cut-off mark and place him securely amongst the world’s best surfers.

“I was not feeling that good at the beginning of the comp and I was nervous because I needed a result here and now with a 3rd I am happy. My win in Trestles was a good result and a 3rd right now. A couple more results and I will be on the World Tour.”

John John Florence (HAW) finished equal 3rd to receive 4225 ranking points, almost double his previous best result in the last twelve months, to catapult him up the rankings ladder where he was sitting in a low 79th spot before the Quiksilver Pro Portugal.

Florence faced Medina in a classic semi-final clash between the two flamboyant surfers of the event after incredible displays by both athletes in their respective quarterfinal bouts. Florence, in quarterfinal nº2, earned a near perfect 9.70 out of 10 with a massive hack followed by a fins-out forehand reverse demonstrating that he is fully recovered from a back injury suffered earlier this year.

“I was hoping just to make a heat,” explained Florence of his objectives at the Quiksilver Pro Portugal. “I haven’t made a heat in the last couple of contests so I am stoked to make it this far. Definitely a lot more confidence after this contest and it would have been good to make the final but the semis is cool. It is a fun wave and stoked to be here in Portugal. Gabriel (Medina) is so amazing. He is such a good surfer and is a contest machine because he is in such good form and doing the same as he did last week in Brazil.”

Dion Atkinson (AUS) who suffered a knee injury in his final heat yesterday, placed equal 5th being ousted by Miguel Pupo in a close heat despite the injury. Being his second best result of 8 which count for the ASP World rankings, Atkinson currently in 45th position will move closer to the 32-man cut-off mark.

“I am pleased with the result but I almost didn’t surf today because of my knee but I thought that I would give it a go. It is my back leg as well so I couldn’t get and drive in my turns. I am going home now for a couple of weeks and will get it checked out.”

The ASP PRIME Quiksilver Pro Portugal offered massive points and attracted a selection of the World’s finest competitors looking to qualify or maintain their position on the ASP World Tour. European surfers were also out to gain the added points on offer for the ASP European Men’s Series. 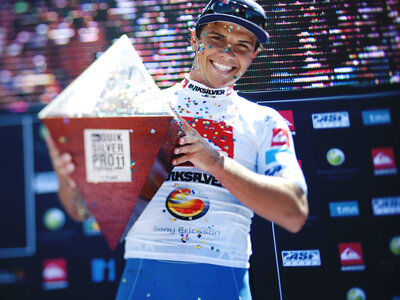 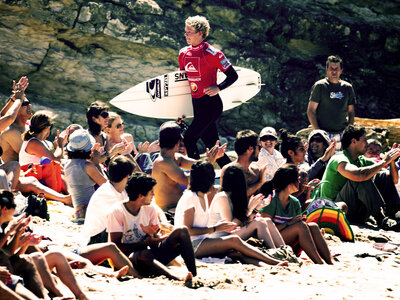 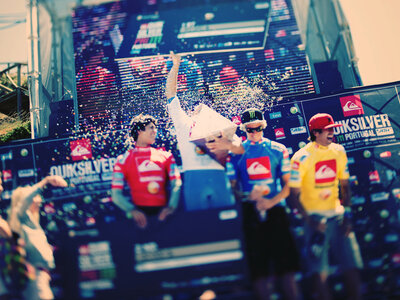 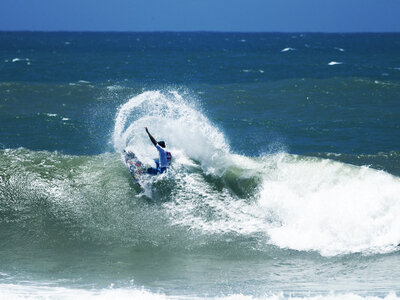 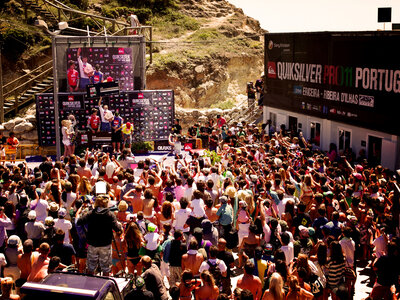 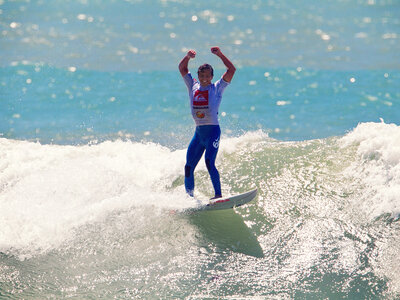