The Billabong Pro win is Smith’s first since qualifying for the elite ASP World Tour in 2008 and the 10,000 ratings points sees him overtake American surfing legend Kelly Slater (Fl, USA) and rocket to number 1 in the world ratings ahead of the next ASP event scheduled in August : the Billabong Pro Tahiti. Smith’s win in front of his home crowd was perfectly scripted, the 22 year-old rising to the occasion in more ways than one as he repeatedly pulled off spectacular aerial manoeuvres combined with an awesome repertoire of powerful carves.

The 30 minute decider was clearly a one-sided affair, Smith getting the best of Melling in the opening exchange by locking in an excellent 8.90 ride, then backing it up soon after with another 9.0 point ride (out of a possible perfect 10) to dominate proceedings.

While Melling had glimpses of his earlier form, the inconsistent set waves at Jeffery’s bay did not roll the Australian’s way and Smith simply had to wait out the clock. At the final siren, Smith was draped in the South African flag and chaired from the water’s edge by ecstatic friends and family, and he became the first official South African surfer to win at elite level for his country.

Rookie Melling can take consolation knowing his runner-up finish in the Billabong Pro, J’Bay has secured his place inside the all-important top-32 cut-off and his performance at the Billabong Pro is a career-best. The 25 year-old had not won a single heat in 2010 until his campaign began in excellent waves at Jeffery’s Bay four days ago.

Melling’s runner-up finish earned the Australian 8,000 all-important ratings points, US$25,000 in prize money and jumps him from 41st to 19th on the ASP’s adjusted One World Ratings.

Durbidge was a victim of Smith’s history making rampage in semi-final 1. Despite forcing the South African into a virtually impossible two-wave scoring combination, Smith proceeded to do the unthinkable. With just four minutes remaining and buoyed by his fanatical hometown supporters, Smith dipped into his bag of tricks, took to the skies and registered the most spine tingling moment of the tournament.

Riding two spectacular waves within minutes, Smith managed to turn the tables on his Australian opponent, the announcers reading out the judge’s scores after the hooter had sounded. Smith had beaten Durbidge by less than half a point - his total two-wave combined score of 14.83 points to Durbidge’s 14.40.

Durbidge’s equal third placing is the best result of his 2010 campaign and the Gold Coast surfer will head into the Billabong Pro, Tahiti in August ranked 7th.

Billabong's Taj Burrow holds the world number 2 ranking heading into the next event in Tahiti, following another inspiring performance at Jeffrey’s Bay.
The 32 year-old is a perennial finalist at the renowned break was easily among the stand-out performers all week.

Burrow accounted for the high flying Californian Dane Reynolds (CA, USA) in his quarter-final match-up this morning, before fellow countryman, Adam Melling out-surfed him in the semis.

Local wildcard and giant killer, Holmes, saw his amazing run through the draw halted by Durbidge. Holmes vindicated his inclusion in the draw by taking down two of the sport’s biggest names; Kelly Slater (Fl, USA) in Round 3 followed by former three time World Champion Andy Irons (Kauai, HAW) in Round 4.

De Souza was the highest placed Brazilian in the Billabong Pro, J’Bay, bowing out to eventual champion Jordy Smith in the first quarter-final of the day.
De Souza’s equal fifth place finish was the fourth consecutive time the Brazilian has reached the quarter finals in South Africa.

The next stop on the 2010 ASP World Tour is the Billabong Pro Tahiti from August 23 through September 3, 2010. 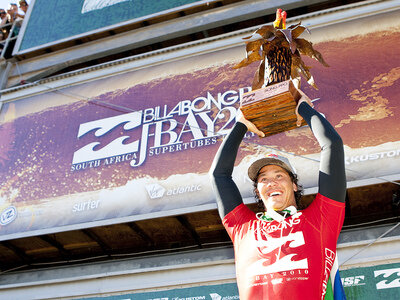 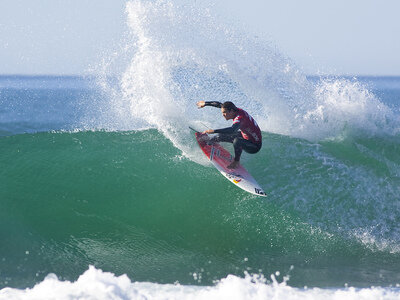