Sage Erickson (Ventura, CA), 19, also donated a standout performance today when she claimed the ASP Grade-2 Pro Junior in a stacked Final. Quarterfinalists were also decided in Men’s ASP Prime event while Finalists were determined for the Men’s ASP Grade-2 Pro Junior. Surfers competing in the US Open of Surfing are out to capitalize on the crucial ratings points on offer to either maintain their position on, or qualify for the ASP Dream Tour while surfers on the ASP North America Pro Junior Series are out to finish atop their regional ratings to qualify for the inaugural ASP World Junior Tour.

Moore, who is currently competing in her rookie year on the ASP Women’s Dream Tour, started off with two small scores to start the heat, and locked into a lefthander in the dying seconds of the heat to capitalize on her priority to clinch the 2010 Women’s US Open of Surfing title.

“I was pretty nervous because I only had two 4 point scores,” Moore said. “Sally (Fitzgibbons) is gnarly and is a great competitor and I knew when that last set came, if I didn’t get on it Sally would have gotten the score easily. I’m just so on top of the world right now, I’m so psyched.”

The tough victory earned by Moore also saw the young Hawaiian take out the richest prize purse in women’s surfing history and the talented natural-footer was beyond belief with her accomplishment. “It is really amazing to win this event,” Moore said. “I just can’t even believe it right now. It just seems really surreal. That Final went by so fast and I wish I could have done some more surfing, but I’m just really stoked.”

Fitzgibbons, who smashed the highest scores of women’s competition throughout the event’s entirety, struggled to get a start in the Final and finished runner-up.
“It was a really tough Final and there wasn’t much opportunity to open up,” Fitzgibbons said. “I had a really good time here at the US Open and second place is awesome so I’ll just take it and move on to the next event.” Fitzgibbons, who has been the runner-up in the last three ASP Women’s World Tour events, was disappointed with the loss, but feels she is close to locking down a major victory in the near future.

“My time is obviously around the corner,” Fitzgibbons said. “I wanted to win that one, but there are more events and it’s great that Nike put up the extra money. It really added to the excitement and hopefully next time I catch a few more waves.”
Erickson, who was the runner-up in last year’s Women’s US Open Pro Junior, jumped out to an early lead in the stacked heat and led the field throughout its entirety to clinch her first ASP victory over last year’s winner Malia Manuel (Kauai, HI), 16, ASP Women’s World Tour campaigner Coco Ho (North Shore, HI), 19, and reigning ASP Women’s World Junior Champion Laura Enever (AUS), 18.

“I came in second last year with Malia (Manuel) getting the score in the last couple of seconds,” Erickson said. “It was hard. I’m just glad to come out this year and win a Junior with such a prestigious Final. This is pretty much my best win because it’s the US Open. It feels great to win in front of all of these people.” Brett Simpson (Huntington Beach, CA), 25, who is the defending US Open of Surfing champion, tore through the Round of 16 today while unleashing the day’s top scores. The local standout blasted a 9.37 out of 10 with an impressive backside air and followed with a series of impressive turns before snatching a 17.17 heat total, the day’s highest, to eliminate current ASP Dream Tour No. 4 Dane Reynolds to advance to the Quarterfinals.

“I think that in the beginning we were both going for big maneuvers,” Simpson said. “I fell on a good wave and he tried a big air and I think I had to shake the jitters out. I know that Dane (Reynolds) is going to go for big maneuvers, he never surfs safe and I was trying to match it. I got the good air and was in rhythm with the waves and I think that’s half of the battle. I’m stoked to be in the Quarters.” Simpson will compete against 2008 US Open of Surfing Champion Nathaniel Curran (Oxnard, CA), 26, in Quarterfinal Heat 4.

Granger Larsen (Lahaina, HI), 20, issued the upset of the day in the men’s ASP PRIME main event when the young Hawaiian eliminated current ASP World Title event No. 5 Adriano de Souza (BRA), 23, with a last minute exchange to advance to the uarterfinals. “I knew going into that heat it was going to be hard,” Larsen said. “They had to restart the heat because no waves came. That actually made me relax a little bit. Then that first set came and I got the better of the exchange. I felt good and had a feeling that I could beat him. I had priority at the end and knew I only needed a small score. That perfect left came and I got the score, I’m stoked.”
Larsen will tackle nine-time ASP World Champion Kelly Slater (Cocoa Beach, FL), 38, in Quarterfinal Heat 3.

Saturday also saw record crowds and all sorts of action at the HB Pier. The Converse Coastal Carnage Skate contest got started, the BMX event kept on rolling and there was a live concert courtesy of Hot Hot Heat and Weezer. Both bands played in front of a packed crowd estimated at more than 50,000 at the music stage.

US Open of Surfing Women’s Final:

US Open of Surfing Women’s Semifinals:

US Open of Surfing Men’s Round of 16 Results: 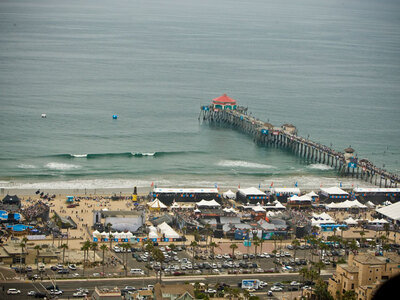 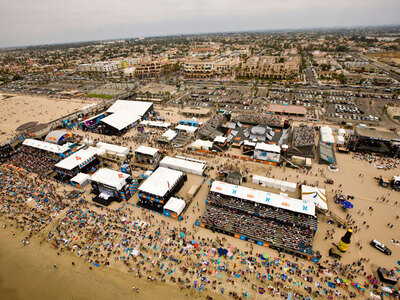 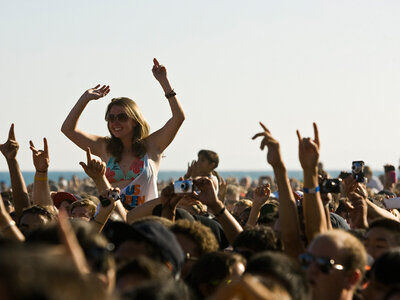 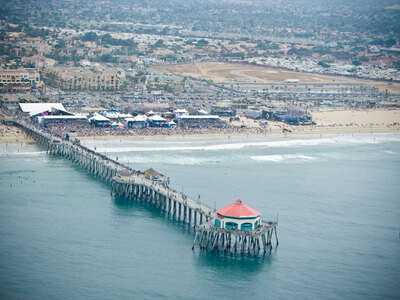 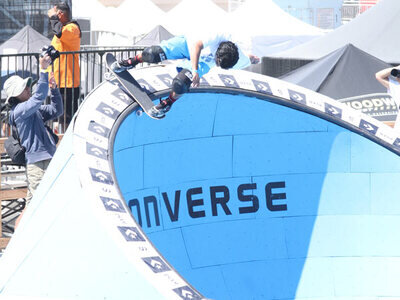 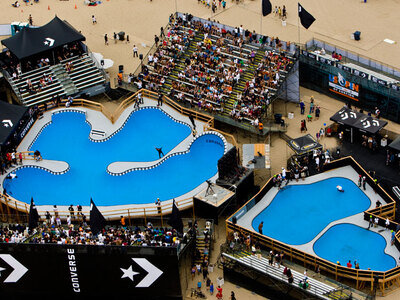