An exciting clash saw De Souza claim his fifth CT victory and defeat John John Florence (HAW) in a thrilling Final. “I’ve just beaten the best surfer on the planet!” said De Souza. “I’m so happy and I feel so motivated. After reaching the Final in Bells and not winning I was really spurred on. It’s such an honor to put my name on the stairs here. Every morning I walk down them and see those names and just wish that my name would be there some day.”

De Souza’s tenth year on the CT has seen an incredible run of form for the Brazilian who has had a fantastic start to 2015 after a Semifinal berth on the Gold Coast and a runner-up finish at Bells Beach. The win today sees him claim the gold leader jersey and move to the top of the rankings heading into the fourth event of the year, the Oi Rio Pro.

“John John (Florence) is one of the most crazy talents we have on Tour and we just had a blast out there,” continued De Souza. “I’ve been watching John John through this event and he’s been killing it. I’m really motivated going into Rio and I feel like I have to keep improving and putting in hard work.”

De Souza previously eliminated Taj Burrow (AUS) and 11-time World Champion Kelly Slater (USA) on his way to the Final. “I think everything that happened in this contest was a challenge,” said De Souza. “We had great conditions at The Box and amazing conditions at Main Break. I really believed in myself out there and I’m so happy and so pleased to win. The World Title race is well and truly underway now and people will definitely be trying to catch me.”

Today is the first Final appearance of the year for Florence and his fifth in CT history. A runner-up finish at Margaret River marks a return to form for the Hawaiian after two 13th-place finishes at the opening two events of the season. The result is his best of the year and moves him up to eighth place place on the rankings heading into Rio. Florence, the 2012 event winner, previously dispatched Nat Young (USA) in the Semifinals and wildcard Jay Davies (AUS) in the Quarterfinals.

“I love coming down here,” said Florence. “Last year I lost early and didn’t get the chance to surf at The Box in a heat so it’s been a really amazing event to surf over there and then come to Main Break and do the biggest turns you can possibly do. The end section is really tricky, it’s really flat then doubles up and it’s really hard to time it right and I made a couple of mistakes. I was stoked to get one really good wave in the Final though. Adriano (de Souza) is so gnarly, he’s so consistent with everything. He only caught two waves out there and they were both high eights and I was blown away.”

De Souza and Florence have had two previous head-to-head CT match-ups, winning one apiece. Today’s Final got off to an exciting start with an opening exchange that saw De Souza deliver two big carving turns ending with a free-fall drop for an excellent 8.93 while Florence failed to complete his ride and earned a 7.00. Florence also went down on his second wave for a 7.87 and again on his third wave. De Souza continued to display his critical surfing for another strong score, an 8.60 for a 17.53 heat total and the lead. Florence was able to complete his fourth wave and was rewarded with a near-perfect 9.00 but it wasn’t enough to take the lead and the Hawaiian was left chasing an 8.53. The Brazilian had priority and took a wave with one minute remaining to block Florence and secure the win.

Nat Young (USA) secured his second Semifinal berth of the year after taking on Florence in the opening Semifinal, the first man-on-man heat for the pair in CT history. Florence was the first to post a significant score, an excellent 8.17, and take the lead. Young delivered three small scores but was left in a combination situation after the young Hawaiian backed up his score with a 7.00. Young answered quickly but couldn’t break the combination. With seven minutes remaining the Californian found his best wave for an excellent score but Florence immediately came back to improve his score and take the win. Today’s result sees Young move up to fifth place on the rankings.

“It’s been an interesting contest surfing The Box on my backhand and surfing really big Margarets,” Young said. “I had a lot of good heats and I’m stoked with the way I surfed. Obviously that last heat wasn’t what I wanted after waiting for six days, but I did what I could out there. I knew it was going to be a tough heat, John John (Florence) is incredible at The Box and a former winner here, but I knew I could beat him if I surf the way I did earlier in the event, but I didn’t put myself on the best waves and that’s how the heat ended.”

An incredibly close heat unfolded between local surfer Taj Burrow (AUS) and De Souza in the second Semifinal. Today is the 17th CT match-up for the pair and Burrow still holds the edge with 10 wins to De Souza’s seven. Burrow, the 1997 event winner, took the first ride of the heat with three strong maneuvers on a left and the Brazilian quickly responded with a series of smooth carves. With the pair neck and neck at the halfway point each of surfers found a wave. De Souza was rewarded with a 7.03 to take the lead while Burrow received a 5.77. The local surfer failed to complete a ride at the five-minute mark and another strong ride from De Souza saw him increase his lead, holding on to it for the remaining minutes of the heat and taking the win. The result is Burrow’s best of the year and sees him move up to sixth place on the rankings.

“I’m pretty devastated that I couldn’t find a wave in the end there,” Burrow said. “I had plenty of opportunities throughout the heat and I let Adriano (de Souza) get under my skin after we hassled each other at the start. I don’t like surfing heats like that, it bugs me. I had a good start to the heat and I just couldn’t find a six at the end there, which is the most frustrating part because you could get a six so easily out there. My board just felt a little long and it didn’t quite go my way.” 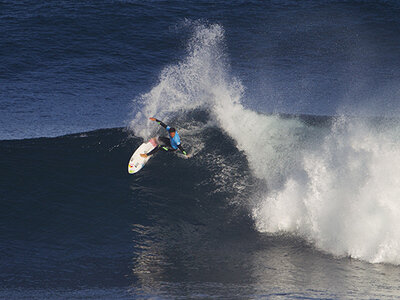 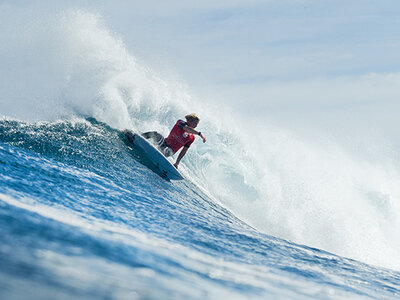