San Onofre State Beach is the Waikiki of the California Coastline -- a beginner's paradise of gentle breaking waves, long sandy beaches and an absence of ego. It was at this break, more than 50 years ago, that legendary surfers such as Lorrin "Whitey" Harrison, Don Okey and Bob Simmons planed forward using balsa/redwood surfboards. Today, it is one of the last few beaches that epitomizes the California surfing lifestyle. On any given summer weekend, you can find a whole tribe of surfers playing volleyball, talking story and swilling beer under grassy huts or sitting hunched over their longboards, waiting for the next lazy peak to float their way.

Locals divide San Onofre into three main breaks: the Point, Old Man's and Dogpatch. All work best on a strong south swell. If you must bring a shortboard to San O', which, by the way, is the equivalent of bringing a longboard to Teahupoo, the Point would be your best bet. The Point is located directly in front of the northernmost parking spot. On a head-high southwest swell, there are some relatively fast lefts (fast in San Onofre terms) and even a section or two to hit if you get lucky. Rights are far more predominant and can be milked with a funboard or longboard. During winter, the Point often shuts down.

With a 15-minute paddle to the south of Point, you'll find yourself in the surfing world's equivalent to the movie Cocoon. Here at Old Man's, geezers rule and grommets learn. The wave rolls off a padded reef some 200- to 400-yards offshore and is mushier than a bowl of cream of wheat. A longboard that'd float Shaquille O'Neal is the weapon of choice and surfing etiquette does not apply. In fact, it's not uncommon to see 10 people on a wave during the summer, nor is it rare to see lawn chairs and dogs brought on board.

Just south of Old Man's is Dogpatch. It's ideal for beginners if the swell is up and they cannot make the paddle out to Old Man's. On a high tide, Dogpatch breaks in slow motion and is second to Doheny as Orange County's easiest wave to learn on.

All of San Onofre's waves are typically indecisive about breaking. If you understand this point, you'll be well ahead of the game. Waves here like to crest, back off, crest, back off, crest, back off and then finally break. Trying to find your "one last wave" of the day can be a good trial in anger management. But if you find yourself ready to spout, you've missed the point. San O' is there to remind us that in this crowded world, there's still a spot where we can all ride together with smiles on our faces.
-- Blair Mathieson 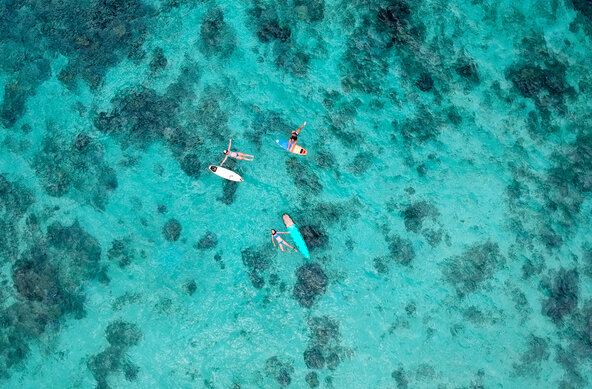 Rate this spot to let other surfers know what you think about it.