Held at Europe’s best left-hand wave in the fishing village of Mundaka. Mundaka is renowned worldwide for its long and hollow waves barrelling over 200 meters in the mouth of the Guernika river. As last year, the alternate site will be set up on the beach of Sopelana. The site is only a few car-minutes away from the center of Bilbao.

The Billabong Pro Mundaka will officially start on October 5th, with the inaugural ceremony, and will run whenever conditions allow until October 17th at the latest. 45 of the worlds best surfers charging Europe’s Best Left. Billabong team riders Joel Parkinson, Taj Burrow, Tiago Pires will compete against other stars like Kelly Slater,Mick Fanning and co. Alongside the world elite, three “Wildcard” surfers will be invited to compete in the Billabong Pro Mundaka: local chargers Hodei Collazo and Marcos San Segundo (Basque Country)as well as rising star Dean Bowen (Australia).

The Billabong Pro Mundaka is one of three stops of the 2009 Men’s ASP World Tour held in Europe. Other Billabong events on the ASP World Tour include Teahupoo in Tahiti, Jeffrey’s Bay in South Africa and the Pipeline Masters in Hawaii.The first Billabong Pro/AM in 1989 was the first major competition organised at Mundaka and set the reputation of the left-hander worldwide. The Mundaka wave is also known for behaving like a “diva”. It’s fickle but when it’s “On”, it is without a doubt one of the best left-hand waves in the world. The Billabong Pro Mundaka has played a crucial part in deciding world champions over the years. Big names like Mark Occhilupo, Kelly Slater and Andy Irons became World Champions after winning this event. Joel Parkinson (Australia) will be also in the line up of this year’s Billabong Pro. Halfway through the 2009 season, Parko is leading the ASP Tour ratings.

In 2005, the wave had “disappeared” following dredging in the river. In 2006, it was back owing to mother nature’s hand and the 2006 Billabong Pro was staged in classic Mundaka conditions.

The Basques, the people who inhabit this region, live in a land of exceptional beauty and diversity. The landscape is a highlight of the event, with mountains overlooking the river mouth, the island of Izaro sheltering legends of piracy, and the Urdaibai Natural Reserve, rated in the UNESCO patrimony. Not far away there are cultured museums and art galleries and the best food in Spain (some say in Europe)!Local gastronomy (the famed Pintxos) and sense of hospitality is praised by surfers, media and visitors alike as Mundaka turns into a buzzing place during the time of the competition. The opening of the Billabong Pro Mundaka sees a truly traditional show with dances and music. At the start and end of the competition, surfers and officials will be greeted by the Aurresku, an honorific and traditional dance, and the 2009 winner will be carried by the local surf club members to be thrown in the port. Winners always accept their trophy wearing a wetsuit and a Txapela (a traditional large beret)!That is the price to pay to have your name carved in the white stone of the perpetual Billabong trophy.

Alongside the competition, Billabong will set up a giant screen in the middle of the village, broadcasting the event during the day, and presenting exclusive film screenings.The surf movie “Still Filthy” starring Andy Irons, Joel Parkinson, Taj Burrow and many more will be premiered at Mundaka.This film is a tribute to the 80’s power surfing classic vid “Filthy Habits”.

The Billabong Pro Mundaka can be viewed LIVE on billabongpro.com. See all the action with six different camera angles, LIVE interviews with surfing experts, locals and special guests,replays, backstage Info and LIVE commentaries in English, French, Spanish and Portuguese. 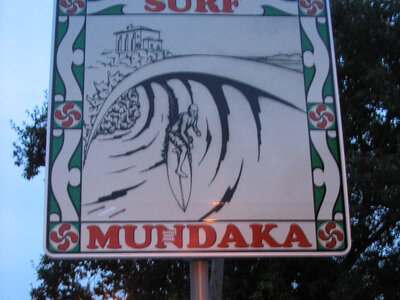