PIPELINE, Oahu/Hawaii (Wednesday, December 15, 2010) - Reigning 10-time ASP World Champion Kelly Slater (USA), 38, was back to his trademark perfection posting the only perfect 10 of the Billabong Pipe Masters in round four today. Slater entered the event at round three stage and his defeat of Pipeline local John-John Florence started him on a roll that continued through the day.

Highlights Day 8** Interview Kelly Slater**
He is through to tomorrow's quarter finals where he will surf against Adrian 'Ace' Buchan (AUS. "That 10 was a long one," Slater said. "It had that good north corner on it and the right was just growing. That one hit the reef really well."

Buchan, 28, did exactly what he needed to today to stay in the hunt for the Vans Triple Crown of Surfing title, presented by Rockstar Energy Drink. While he trails defending Triple Crown champ Joel Parkinson (AUS), who is shooting for a third consecutive Vans title, Buchan is in the driver's seat being that he is still in the event and Parkinson was eliminated in round three today. Buchan needs to reach the final, to steal the Triple Crown title.

With Slater's 10th ASP World Title having been decided in Puerto Rico, the six-time Billabong Pipe Masters Champion is taking a more light-hearted approach to competition in the final event of the year.

Buchan locked into amazing barrels on both his forehand and backhand today to advance though to the Quarterfinals. He also accounted for former Pipe Masters champion Bede Durbidge (AUS) and local force Fred Patacchia (HAW).

"I'd love to win the Triple Crown," Buchan said. "It's a huge prize, but I have a lot of work to do. I do have a chance though and that's all I need."

When the dust settled, it was Gilmore who navigated the treacherous conditions to earn her third Vans Triple Crown title by winning the Vans Duel for the Jewel at Backdoor Pipeline. She won $10,000 and a Nixon watch.

"It's such a Hollywood kind of a dream," said Gilmore. "We had such a long wait in between the Sunset event and this heat so it's kind of like the nerves were building and building.

"Thanks to Vans we were able to have the Triple Crown this year and it's definitely up there with winning world titles. Each place is so different and challenging, you can show up here with all the confidence in the world and get smashed, so to win it again I feel really happy and proud of my achievements this year."

In addition to the high scores and Vans Triple Crown race, today's Billabong Pipe Masters provided the final chance for surfers looking to qualify for the 2011 ASP Dream Tour.

Maui's Dusty Payne (HAW), 21, issued the upset of the day by eliminating two-time ASP World Champion Mick Fanning (AUS), 29, in an astonishing comeback with a near-perfect heat to requalify for the 2011 ASP World Tour.

Payne, who was in need of a combination of 17.94 to overtake Fanning to advance out of his Round 3 bout, capitalized on his intimate knowledge of Backdoor Pipeline. The talented natural-footer navigated through two amazing barrels on his forehand in an impressive barrel-riding duel against fanning to net a 9 and a 9.87 (the day's highest heat total) in the dying seconds of the heat to eliminate the Australian Champion while simultaneously solidifying his position on the 2011 ASP World Tour.

"Mick (Fanning) is not a guy you want to draw anywhere in the world," Payne said. "I knew whoever I had was going to be tough and that I just had to make it through the heat. I was out there thinking 'this is how you're going to lose, you're going to get comboed at your own spot?' Then I got that 9. Then with 20 seconds left there was another one. I got so weak because I knew I had to catch that wave and make it. I was filled with emotions and thought I was off tour, and then I saw that last one and knew it was a 9."

Slater perhaps summarized Payne's performance today best: "There are moments in your career that define you and that was one of them for Dusty."

Payne eventually fell to ASP World Tour veteran Kieren Perrow (AUS), 33, in a Round 5 Backdoor barrel shootout that played out much like the Payne/Fanning clash, only this time the tables were turned in the last minute in favor of Perrow.

"It's good to enter this event not needing a result to stay on tour and I just want to keep getting barreled," said Perrow.

"I knew it was going to be a really tough heat against Parko (Joel Parkinson)," Wright said. "He's such a good barrel rider and I knew he was going for that Triple Crown, but I want to end my year with a bang as well. I knew that going in to the heat and I wasn't going to give him an inch. We had a great tussle and were battling for position that whole heat. I was pretty lucky to get that score right at the end. I'm pretty stoked to get through that one."

"I found the conditions on my backhand really tough," Wright said. "A lot of the barrels, I'd get right to the end and the waves would have this backwash fold to it and clamp you right at the end. I would just get so slowed down, but there are some great waves out there."

Surfline forecasts a continuation of good conditions allowing an 8am start with the men's quarter finals tomorrow. 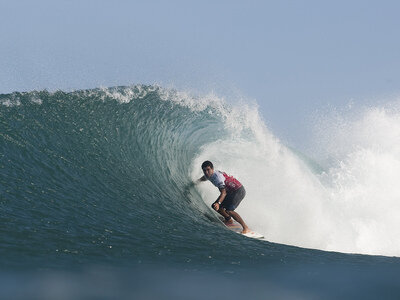 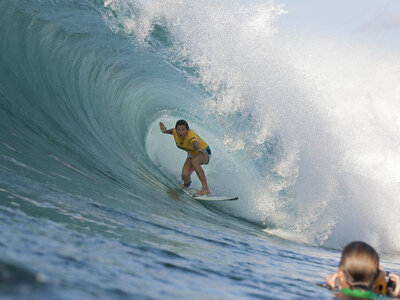 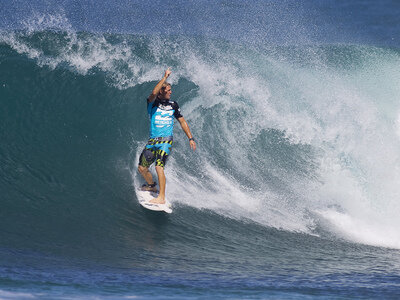 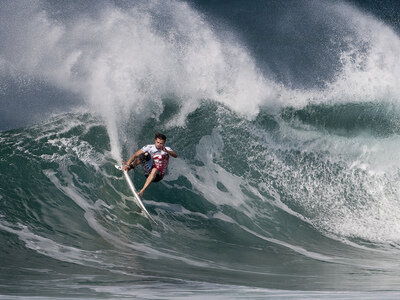 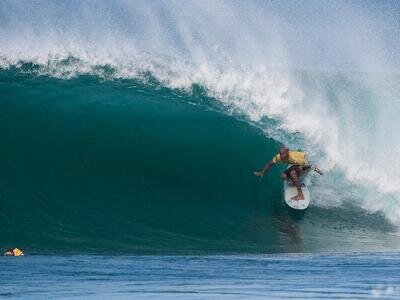 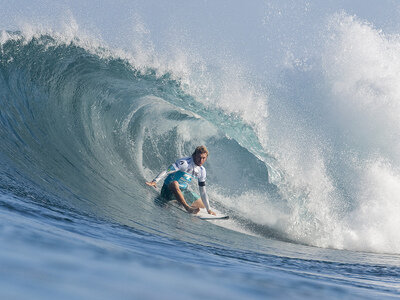