HAWAII has continued to dish out the goods for round two of the Billabong Pipe Masters, the final event of the 2009 ASP Men's World Tour and the Final Event of the $1,000,000 Vans Triple Crown of Surfing.

While world title contenders Joel Parkinson and Mick Fanning are yet to surf their opening round three heats, the surfers in the final eight eats of round two reveled in the tubing 2m (6-8 FOOT) waves.

17-year-old event wildcard John lorence(HAW) continued his run of fine form in the Backdoor barrel rides, posting the second highest heat score of the event in round two. The natural-footed super talent showed little regard to Brazilian competitor HEITOR ALVES by locking in a 9.43 and a 9.47 in the 40-minute-heat. FLORENCE has been in white hot form, also posting the third highest heat score of 17.20 in round one yesterday. He will now face USA's BOBBY MARTINEZ in round three.

The Hawaiian heavy hitters kept coming in round two with former three time world champ and Billabong team rider ANDY IRONS blasting past Aussie DREW COURTNEY in the day's final heat. A mixture of long tube rides and trademark power turns rewarded 31-year-old IRONS with two near perfect scores, a 9.07 and a 9.33.

Australian Dean Morrison started his final event of the 2009 on the right foot, threading two long tube rides to defeat local pipe specialist SION MILOSKI (pron Sy-On Mil-Osky). The man they call DINGO dominated the entire heat, kicking off with an 8.00 before cementing victory with a second 8.93 ride. After a roller-coaster year of competition, the world number 17 has safely qualified for the 2010 tour and will standby to watch fellow cooly kids Fanning and Parkinson battle it out for the crown.

Fellow Australian Dayan Neve(Manly) was the only other Aussie to progress through the final heats of the second round, beating Frenchman TIM BOAL.

2008 Billabong Pipe Masters runner up Chris Ward(USA) survived a narrow escape to European tour rookie Aritz Araburu(EUK) in the tightest heat of the round. WARD started strongly with a 7.17 but was relegated to second when his opponent locked in the heat high score of 8.83 for a long backdoor tube. WARD fought back in the dying stages to lock in a 8.33 and steal victory on 15.50 to 14.66.

Michael Picon (30) from France is now the only European still in contention for Round 3 where he will meet Tom Whitaker (Aus). The Frenchman needs to reach the semis at the Billabong Pipeline Masters in order to requalify himself for the 2010 World Tour. Picon showed a devastating form so far as he posted the highest score of the contest with 19,76 pts (out of 20) during Round 2 against Josh Kerr (Aus).

A predicted swell increase overnight could see FANNING and PARKINSON begin their battle for the 2009 world title tomorrow. With FANNING in the box seat to claim his second ASP world crown, Billabong's PARKINSON must place at least 3rd to seal the title. Both surfers have drawn dangerous pipe specialist's in round three. FANNING will face the inform TORREY MEISTER (HAW) and PARKINSON is scheduled to meet GAVIN GILLETTE.

The scenarios for the 2009 ASP World Title heading into the Billabong Pipeline Masters are as follows: 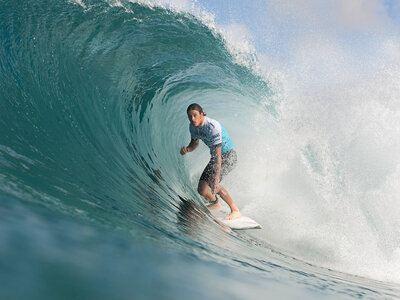 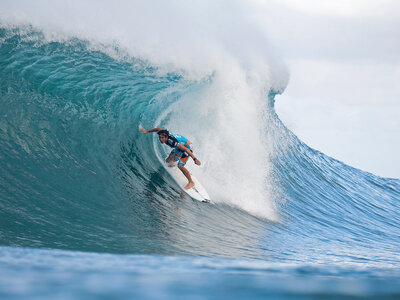