Merello employed patience, local knowldege and a determined effort to ride the biggest waves to overcome his more experienced challengers. Being a goofy-footer on the reeling lefts was no handicap, either.

Runner-up was Peru's Gabriel Villaran, whose performances throughout the competition were nothing short of spirited. Villaran only added to his reputation of being one of the most well rounded surfers on the planet, doling out many high-risk maneuvers that are typically reserved for flamboyant small wave surfing. Third place went to California's Peter Mel (Santa Cruz), followed by Jamie Sterling (Hawaii), Mark Healey (Hawaii), and Greg Long (San Clemente, Ca.) in that order. En-route to the final, Merello also accounted for the eliminations of Grant 'Twiggy' Baker (South Africa) and Carlos Burle (Brazil).

Merello's defeat of a stellar international field of big wave riders was inspired by his mother, who is battling cancer, and by his community. The win was made all the sweeter by being in front of a huge home crowd. Adding to the moment, all of the surfers competing today came together to present a total of $15,000 to local fishermen from the village who lost their homes during the February 8.8 earthquake and ensuing tsunami.

"When I found out (I had won), it was really, really special for me," said Merello. "But it wasn't just for me, it was for my mother, who is in an intense battle with cancer and going through brutal treatments. It was for me, for her and the entire community. We've all been through a lot."

Hawaii's Mark Healey, one of the most traveled and experienced competitors of all, wasn't alone when he praised Merello's performance today.

"He had that local knowledge and was straight into the biggest and best waves," said Healey. "The conditions really changed throughout the day and he was the best at adapting. I've surfed with Cristian on previous visits here, but outside of Chile, or South America, people probably haven't heard of him.

"But that's how it is with big wave riding, there are going to be people like him that come out of nowhere, so to speak. It's a different way of surfing and you've really got to want it. He definitely wanted it today.

"Some of the waves were really barreling, and it's a point, so it's totally different to what we're usually riding in Hawaii. Plus it's a left, so no excuses for me! I got a couple of tubes early in the day, so it was good."

Speaking on behalf of the local community, Chile's most famous big wave rider Ramon Navarro said they were ecstatic with the event: "The locals are so happy today. This is one of the best contests we've ever had in Chile.

"Punta de Lobos was beautiful today. The waves built all the way through to the final and all the extra sand out in the break made it perfect. This was a great day for all here at Pichilemu."

The Quiksilver Ceremonial Punta de Lobos Big Wave Invitational, presented by Suzuki, was a one-day big wave event with a holding period from April 1 through May 31, 2010. Without question, today's swell will go down as the largest in the period. 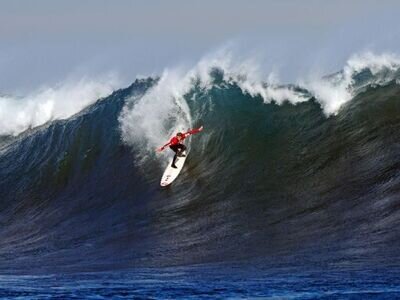 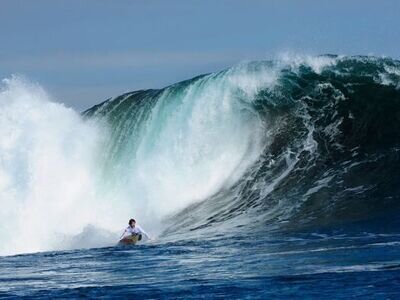