John John Florence (HAW), 19, also found his way to the podium as the overall winner of the 2011 Vans Triple Crown.

Perrow, who finished runner-up to Jeremy Flores (FRA), 23, in last year’s Billabong Pipe Masters, returned to form again this year and charged the massive Pipeline conditions on the opening two days of competition to solidify his position on the 2012 ASP World Tour. The Australian was equally deadly in the smaller conditions on the final day and commanded the Final against Parkinson in a backdoor shootout to secure his maiden ASP World Tour victory.

“It took me up until now to get over getting second to Jeremy last year” Perrow said. “It’s so good to get back here. I just felt so comfortable the whole time. I’ve had such a great event anyway and coming in to today, it was just amazing. The waves have been phenomenal. I haven’t surfed Pipe like that in my entire career. This is pretty much the pinnacle for me.”

Parkinson, a multiple Vans Triple Crown Winner, came close to clinching his first Billabong Pipe Masters Title, but was unable to find a rhythm in the Final against Perrow.

“It’s a hard one to lose because you’ve only got one guy to beat and you’ve beaten so many, but it’s the hardest one to win,” Parkinson said. “I couldn’t think of anyone more deserving than Kieren (Perrow). He’s a true Pipe Master and one of the best guys out there and I’m so glad he won.”

Parkinson battled his way into the Final with a hard fought victory over Kelly Slater (USA), 39, in their Semifinals clash. After a series of exciting exchanges, the Australian was in need of an 8.21 with just minutes remaining and Parkinson drove through a barrel on his backhand to secure an 8.60 and his Final berth.

“I knew my work was cut out for me,” Parkinson said. “Surfing against Kelly (Slater) is the biggest thing you can do. After he got that 9, I thought, ‘here we go.’ I thought he peaked against John John and he was just at it again. That wave just came to me. It was one of those situations where you forget about everything else, am I in the right position, am I doing anything right. Conditions are not perfect at all, but there are some really good waves.”

Kelly Slater took an amazing come from behind heat win in his Quarterfinals matchup against lethal Pipeline local John John Florence (HAW), 19. The Floridian was in need of a combination of 16.70 to overtake Florence with just three minutes remaining on the clock, and maintained his composure, threading the needle on two back-to-back backdoor barrels for a 9.70 and a 7.83 to surpass the young Hawaiian en route to the Semifinals.

“I was just going to try and have some fun because I didn’t want to run and I thought we’d find another day,” Slater said. “I figured I’d try and get in that head space and I’d ride a short board and I actually got a really good left and my board was wrong for it. I thought it was going to cost me the heat. It just came to me in last three-or-four minutes. I’m just trying to hold John John (Florence)at bay because he’s going to rule Pipe for the next 20 years. I just want to get a couple before I’m done. He’s been the man to beat out here. He’s had two 10s and a couple of high 9’s.”

Slater put on another strong effort in his Semifinals clash against Parkinson, but was unable to surpass the Gold Coast native and finished equal 3rd overall.

“Joel controlled it from the beginning with a 7 to start,” Slater said. “He was holding position from there. I got the 5 and we were in the cycle where he had priority besides that one that I got that 9 on. I’m super surprised that he got both of his good scores on the lefts because we’re usually looking at the right on days like today. He was just in sync with it and there’s not much you can do about that.”

Michel Bourez (PYF), 25, who was rated 3rd on the Vans Triple Crown ratings entering the Billabong Pipe Masters, needed to advance to the Final to surpass Florence on the ratings, but finished painfully close when he lost to Perrow in the Semifinals. Despite falling short of the Vans Triple Crown Title, the equal 3rd place finish marks the Tahitian’s best result of the year.

“It was a painful way to lose, especially when there weren’t many waves out there,” Bourez said. “I wish I won the Triple Crown, but it happens sometimes. It’s good for the confidence and a good result for the end of the year. It’s good to make the Semifinals, but I just wanted one good barrel out there and it never happened.”

John John Florence put on an amazing show at this year’s Billabong Pipe Masters, taking the event’s only two perfect 10-point rides, but fell to Slater in the Quarterfinals. Florence’s overall effort including a win at the Vans World Cup of Surfing at Sunset Beach and a 5th place at the Reef Hawaiian Pro secured his first Vans Triple Crown win, making him the youngest competitor in history to win the prestigious series.

“I’m so stoked to be here, I’ve been surfing these waves my entire life and watching everyone over the years,” Florence said. “I’m so happy that I won this and to have my name with everyone else who has won over the years. I just want to say thanks to my Mom and Pancho Sullivan and John Pyzel and all my sponsors. Thanks to everyone.” 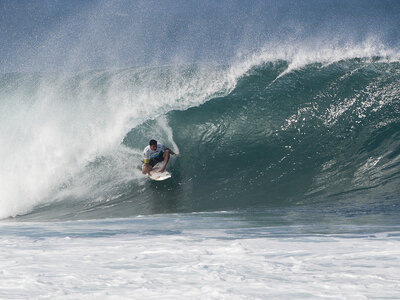 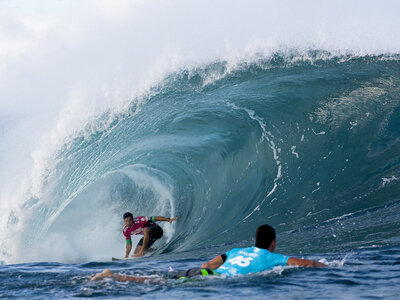 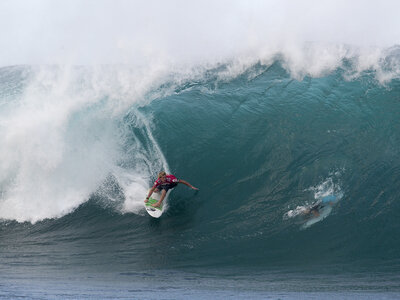 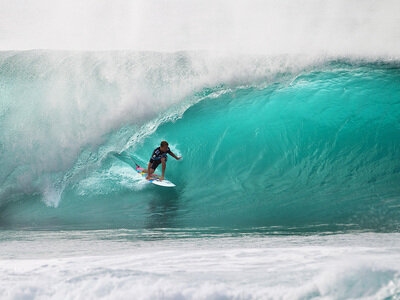