RIBEIRA D’ILHAS/ERICEIRA, Portugal (Saturday, June 18, 2011) –The new generation of up-and-comers on the ASP Star tour stormed into the quarterfinals of the ASP PRIME Quiksilver Pro Portugal with dominating performances in tough wind affected 3-4ft waves at the main event site of Ribera D'Ilhas.

Miguel Pupo (BRA) 19, who is currently nº30 on the ASP World rankings and inside the midyear 32-man cut-off, came home late on his final wave to leap straight into the quarterfinals with a combination of backhand snaps in the pocket in the final moments of his 30-minute clash.

“My wave was just perfect and it went all the way through to the inside. This is an important contest with the points here and I am happy with my ranking at the moment. I got a good chance to go up the rankings and I want to take my chance.”

Pupo, one of the most explosive and innovative surfers on the planet, recognises the immergence of future talent in the sport of surfing and is satisfied to be part of the new school coming through.

“The young guys have been on fire the whole event and we had good results last week in the previous PRIME contest. There are plenty of young guy coming up and you can see that they are pretty strong and good surfers and they will go through for sure.”

John John Florence (HAW) 17, put on another relaxed performance on the tricky right-handers with huge hits in the critical sections mixed with top-to-bottom rail carves to claim a two-wave combined total of 16.67 out of 20. Low tide conditions meant a shifting peak which added to the importance of wave selection to locate the potentially higher scoring waves.

Florence, ranked nº79 in the world, is back after suffering a serious back injury while surfing his favourite wave, the notorious Banzai Pipeline. The same location where he achieved an ASP 4-Star tour victory earlier this year. This result is guaranteed to catapult Florence up the rankings list as the midyear cut approaches.

“It is my best result for a while. I hurt my back at Pipe when the lip hit me and I was out for about two months but I have come back and all is going well.”

Gabriel Medina (BRA) 17, was the first competitor to qualify for the quarterfinals with an amazing display of sharp crisp snaps in extremely tricky conditions early this morning. Medina made it look easy as he flowed from turn to turn on the wind affected wave faces and built on his wave totals to finish with a combined total of 15.67 out of 20

“I am so happy right now and I am going to get really good points now with this result. I am trying to have fun in each heat but it is hard to compete against these guys. I want to do my best in this contest for sure. I feel confident at the moment but I am not thinking about winning this contest so hopefully I can do even better.”

Pat Gudauskas (San Clemente, USA) 25, after having a shocker in the ‘No Losers’ round, came back with a strong performance to oust a determined Junior Faria (BRA) and claim his best PRIME event result for 2011. Currently bordering on the 32-man cut-off mark, the guaranteed equal 5th placing and 3120 valuable ranking points at the Quiksilver Pro Portugal is a welcomed result so close to the midyear mark.

“It is exciting now. It is definitely my best result in the PRIMES this year. I’m stoked and I think I am in a good heat tomorrow with John John Florence so I will just take it one heat at a time from now on and hopefully get through a couple more.”

Gudauskas changed his game plan in Round 5 and kept busy looking for waves and sections to hit. His final wave of 8.50 out of 10 secured a solid win and added much needed confidence heading in to the final day of the official waiting period of the Quiksilver Pro Portugal.

Dark horse Jay Quinn (Gisbourne, NZL) 27, for the second consecutive day, stormed through his heat to head directly into the quarterfinals with a power packed 16.97 out of 20 heat total, the highest of the day. Jeremy Flores (FRA) 23, and Julian Wilson (AUS) 22, advanced also to the final 8 surfers despite having to surf Round Five. Both ASP World Tour members, after having failed in Round Four, came back to give commanding shows with their trademark forehand attacks in the improving afternoon conditions.

The Quiksilver Pro Portugal will make a first call at 10am local time for quarterfinal nº1 with Gabriel Medina (BRA) up against event top seed Jeremy Flores (FRA) and continue through to the crowning of this year’s champion. 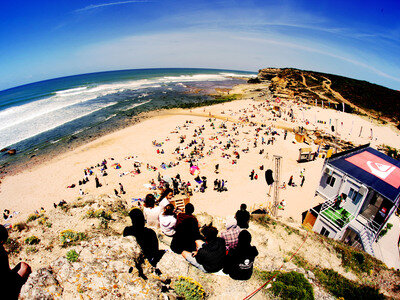 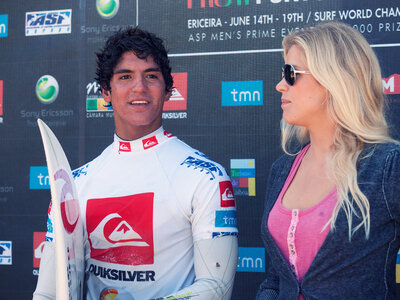 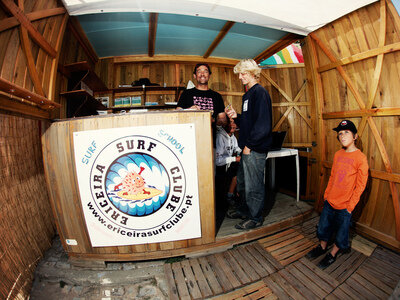 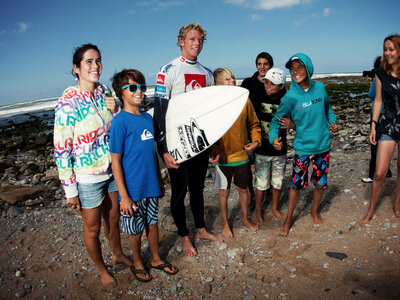 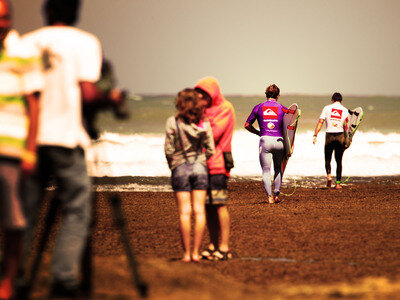 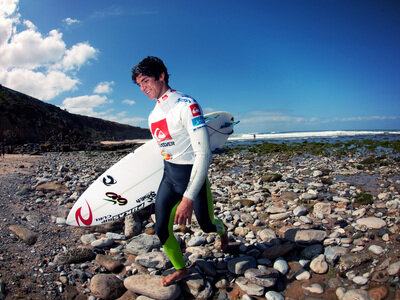