Bali is possible the best place in the world to surf. It doesn’t matter whether you are a beginner, advanced or pro there are waves suitable for everyone. If you are not only up for surfing there is so much more to do.

After arriving on Bali and getting used to daily temperatures of 30+ degrees it was time to shop for some boards. It was pretty easy to get cheap short boards for my friends that were already surfing for a bit, but as in most places a lot harder to find something to start on. But after a few hours of searching I became the owner of true old-school Gun from the Hawaiin shaper Dick Brewer. A nice and thick 7.7, not the typical Bic Malibu, but something that serves to catch waves and rides. So I had a board and that is really all you need to surf on Bali, the water has 26 to 27 degrees everyday. So no wetsuits, just a lycra to protect your skin and a lot of sunscreen for the strong sun. – Ready for the first session…

I don’t remember much of my first sessions but as anyone who surfs a bit can probably remember, it is hard work in the beginning. Walking out against the waves, waiting for the right one, taking it and trying to get up – next one! After a few hours of that everyday and nice noodle arms and legs you always have one wave you remember, that one where you got u really well, where you stayed on, what felt like forever; the first green wave, which hasn’t broken yet; or the first one you rode across. There’s always something that keeps you stoked and wanting more, even if you feel like it’s all s**t because the ocean gave you a big beating and you find yourself on the shore recovering and watching the waves in the sunset, you still soak up the atmosphere and think about the next session, and are happy you went in. – It’s always good to get wet!

In the beginning my live was mainly located in three places: the Uni on Udayana campus, our little German community in the housing area we lived in Jimbaran and lastly: Kuta beach. After Bali I have travelled a lot and I must say I have not yet found a beach that would be more suitable to learn how to surf. Back then I didn’t know much about surfing but today I can say that the banks on Kuta are really nice. The beach is gently sloped so you can just walk in at first and catch the smaller ones without worrying about getting washed, as the bigger waves break further outside. There are I guess three main lines of sandbanks so you can just pick your wave-size, whether you are still tryin to catch the white-water to get up on the board or you are ready to do your first takeoffs on hip-high green water waves, or you are advanced and looking for real quality beach break waves that got some size and power to them, Kuta got it all…

After a while you get in shape, your balance works better and you begin to internalize the movement of getting up on the board. And then you start to search.

In search for new challenges we looked for other spots to surf. One of our favourite spots became Dreamland beach. Dreamland is located just north of all the famous spots the pros surf on Bali such as Uluwatu or Padang Padang. Compared to those super challenging spots Dreamland is a really easy to surf beach-break. However it gets quite powerful and big so a bit of fitness and experience is required to surf here, especially when it gets crowded. We had great surfs, watched sunsets and had great food in friendly atmosphere there.

As I heard today its all different. Back in 2005 when we were the first buildings of a huge building project financed by some politicians son were started. People started interrogating us and demanding some 5000 rupiahs for entrance (about 40eurocents). Those were the first signs, more recently all the traditional warungs (shops) build on each other on the cliffs of the beach have been torn down to create space for a huge resort. So dreamland is not what it used to be anymore…

This is different side of Bali and shows the problems that Indonesia has, on Bali you don’t notice it all the time but everybody should keep in mind that Indonesia is one of the poorest countries on the planet reigned by a few rich and powerful people.

If Kuta and Dreamland were steps one and two on my learning how to surf stair the next would definitely be Medewi. We only surfed Medewi once but it was very memorable for me. Mededewi is a point break, which means that unlike on a beach, where the sand and thus the location where the waves break constantly shifts, the waves here break always on the same point. This is due to some sort of reef or solid underground. The problem with reefs is that they are often very shallow and as in the case of most waves on Bali consist of sharp coral that can cut your leg feet or face if you are not careful therefore such waves are not suitable for inexperienced beginners.

Considering sharp coral Medewi is sort of an exception to Bali as the wave breaks on a reef of round boulders; still you don’t want to hit those but at least of you do they are not going to tear your skin off. Another advantage of such boulders is that the waves break a lot smoother and more mellow on such a bottom. This made Medewi a great spot for my first point-break experience.

Points are great to surf, as you paddle out and don’t have to worry about duck diving or anything; you just paddle around the white-water or often even find a channel that takes straight to were you want to be.
So here I got to the line-up and learned one of the main rules of surfing, “it’s always bigger than it looks from the car park!” Of course if you look from the beach a wave may seem tiny but once you are out there and look down the face while paddling to get the right speed a 1 meter waves suddenly becomes quite big. That was problem number 1. The next problem was that a wave breaking in the same spot all the time is easily caught by experienced surfers thus even if it’s not that crowded it’s hard for beginners to get a wave. So I spent my first hour or so waiting and looking at the waves and others surfing them. After a while I paddled a bit further towards the peak and Oops suddenly I got one… I got up and unlike the beach break wave I surfed before this ride didn’t seem to be ending; I put a bit of weight on the toe edge and the board turned; back to the heel, turning again. Damn; I was stoked!

What felt like minutes might have been 10 seconds, quite a long wave but most important something I had never felt before. Till today the memory of those seconds on the wave has not left me and made me go again and again just to have that one good wave of the day that makes everything worthwhile.

Next week we will go on with the next part - Nusa Lembogan. Stay tuned! 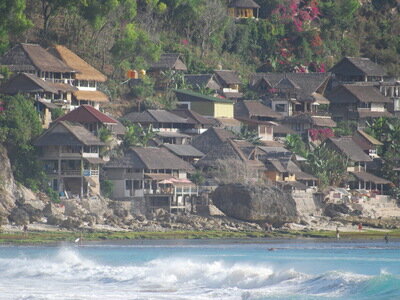 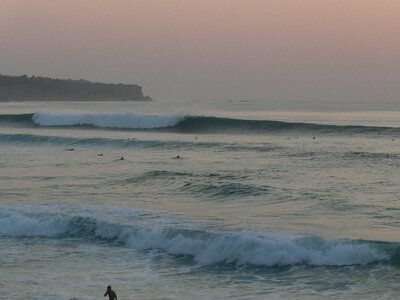 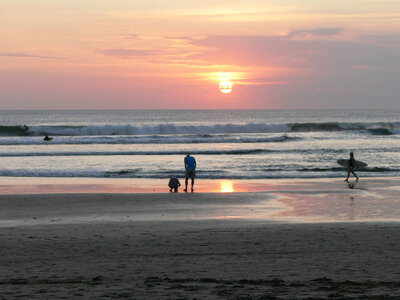 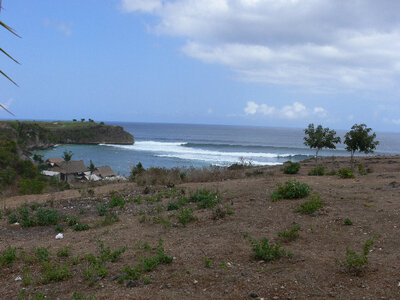 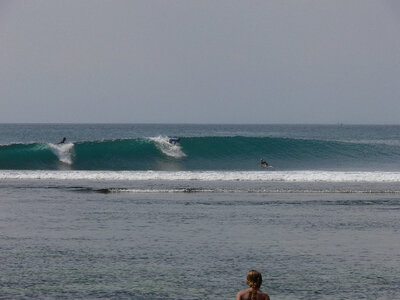 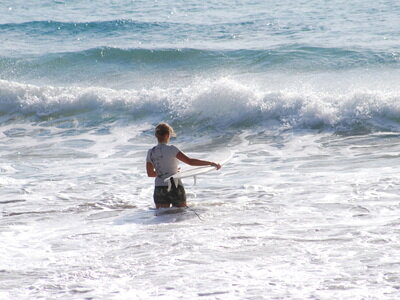 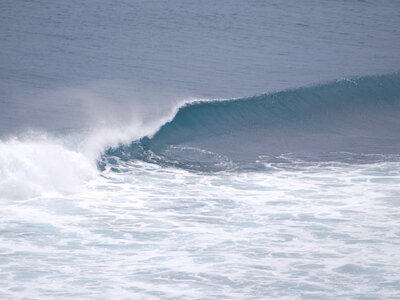 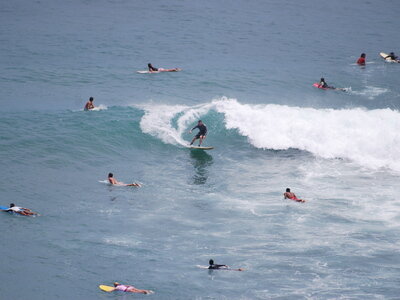 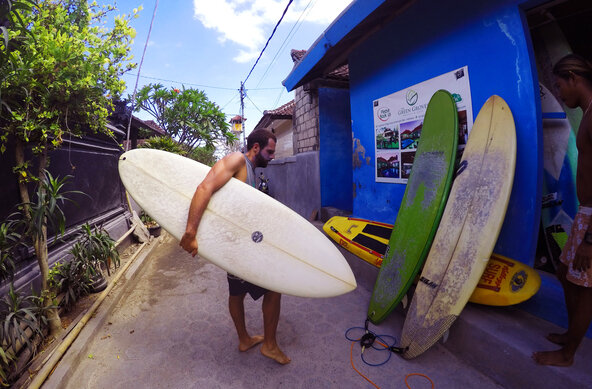 Beautiful small island surrounded by beaches, perfect for those of you who like quietness 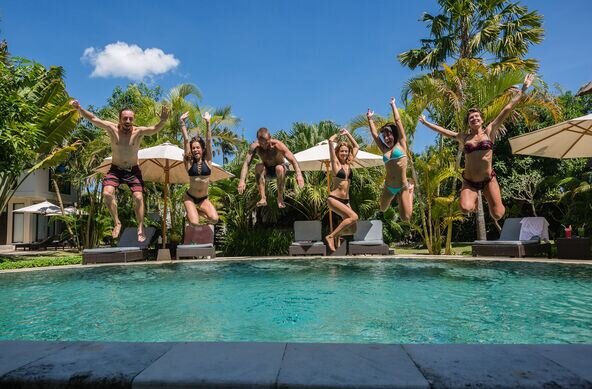 Wave house Surf Camp is the great place with super comfortable rooms, big green garden with 2 pools, WIFI, free water park and gym (6 mins by feet) and included breakfasts in our cozy chill restaurant and many other features!