In a nail-biting men’s final, Huscenot, played to his strengths against one of the undisputed rising stars of international surfing - Brazil’s Jadson Andre, who has been lighting up the Sydney line-up all week with his incredible aerial repertoire.

Jadson Andre, the 2009 runner-up and number one-event seed, held the lead for most of the 30 minute decider, and with time ticking away, was looking to go one better than last year and cement his place in the history books. But Maxime Huscenot rallied and with just seven minutes to go, pulled out the highest scoring ride of the final, unleashing a flowing display of flashy manouevers to earn himself a 7.50 out of a possible 10 to jump into the lead, and keeping it until the final siren sounded.
Maxime Huscenot, at 17 years of age, created history by becoming the first French surfer to claim the world junior title, a prestigious title won a by 3 times world champion Andy Irons and Joel Parkinson at the early days of their carreers.

On the girls' side, the Australian Laura Enever won at her hometown and naturally deserved her Billabong ASP World Junior Championship Title : the explosive natural-footer consistently posted the highest scores each round, and with the help of some massive scores courtesy of a blistering forehand attack, Enever posted an insurmountable lead in the Final against Alessa Quizon (Makaha, Oahu, HAW), 16.

French surfers have also all honors by placing Pauline Ado, 18, last year’s ASP World Junior Champion, and Joanne Defay, 15, the surprise dark horse of the contest, both at Equal 3rd.

The Billabong ASP World Junior Championships fuelled by Monster Energy mirrors the competition format of the ASP World Tour and is considered the sport’s “crystal ball” for aspiring champions. In addition, a Final’s placing in the tournament affords the successful surfers an unrivalled seeding on the ASP World Qualifying Series (WQS) that serves as a springboard to the ASP World Tour. 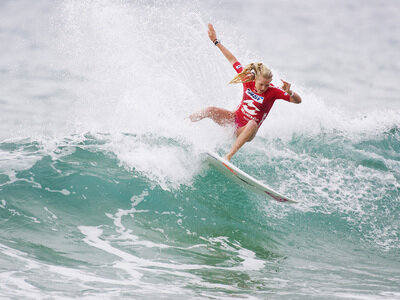