Gisborne, New Zealand, March 23, 2011 - The O’Neill Cold Water Classic Series 2011 was greeted head-on with the first big southerly storm of the year to hit Gisborne. Despite conditions being less than desirable with 30 knot onshore winds, cold temperatures and a messy 2.0m swell, the event kicked off with a full day of explosive surfing.

After an absence of thirteen years for top level Association of Surfing Professionals (ASP) Men’s events in New Zealand, it was still Maz Quinn (Gisborne, New Zealand) who impressed for the Kiwi’s on day one. Quinn surfed through to the round of 96 after winning today’s heat scoring 10.17 out of a possible 20 points.

Fourteen years ago Quinn shocked the surfing world by placing second in a New Zealand ASP event before going on to qualify for the ASP World Championship in 2002, the only Kiwi to ever do so. Now retired from international competition, an event at his home break was too hard to refuse entry.

“It would have been good to have this size comp at home when I was competing internationally but better late than never” said Quinn. “To have a six star event in ya’ backyard is awesome for the local surfers and good for the young kids to watch too.”

On his performance today, Quinn felt it was a bit of a lucky dip with the average waves on offer. “I had a slow start but got two at the end and yeah, stoked I made it through in the end” added Quinn.

Quinn is confident the conditions will improve over the coming days for all the visiting surfers. “The swell looks like it gets solid tonight and tomorrow with lighter winds tomorrow too. The winds won’t be flash over the next few days but at least there will be swell – that is the main thing.”

Top scorer of the day was young Australian surfer Ryan Callinan. Callinan scored a 15.66 heat total in the highest scoring heat of the round to progress through alongside Nic Von Rupp (DUE).

“Today was so much different to when I was last in New Zealand competing in a pro junior event at Raglan. It was real messy out there today but there were fun ones. It was hard to find them but if you got the right ones it was good, lucky I got a couple at the end of the heat” said Callinan.

Callinan has been in good form competing on the ASP Australasia Pro Junior Series but is hoping that form translates to a good result here in New Zealand on the ASP World Tour.

“Rugged and freezing conditions...it’s the first taste of winter for most of us here I think but it’s a great place for an event” said Coleborn. “A lot of New Zealand surfers have been blowing up on the ASP tours over the past couple of years so they should definitely have an event here in New Zealand and this area seems perfect...get’s all the swell and there’s a variety of waves about, it’s great!”

Peruvian surfer Gabriel Villaran was another heat winner and one surfer was more than used to the water temperature on day one comparing conditions to his homeland.

“I never been here before but I am used to surfing cold water so it is not so bad” said Villaran who won his first round heat scoring 11.50 to progress alongside Brazilian Caio Ibelli.

“I definitely wanted to come to New Zealand this year and check it out and surf these waves” he said post heat adding “It took almost two and half days to get to New Zealand but driving from Auckland to Gisborne was beautiful seeing all the landscape and farmland, it was very nice and very different from home in Peru.”

Second placed Ibelli snapped his board early on in his heat and exited the water exhausted after swimming in and then running back around the beach to paddle out.

“Yeah I break my board in five minutes, I am so tired now after running around and paddling back out. I couldn’t hear the scores so I still don’t know if I made it through said Ibelli who indeed moved through to the round of 96 which is likely to be contested tomorrow.

The event opened on Tuesday (22nd March) with a passion filled powhiri at the Maori Battalion Marae located at Manutuke, just south of Gisborne. The Kaumatua (elders) of the local Iwi (tribe) Rongowhakata welcomed Manuhiri (guests) to their land and ocean blessing the event and wishing all the entrants well with their efforts.

The event will be the richest to ever frequent the shores of New Zealand with a massive $145,000 (USD) up for grabs. 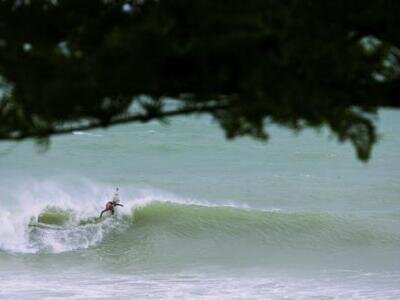 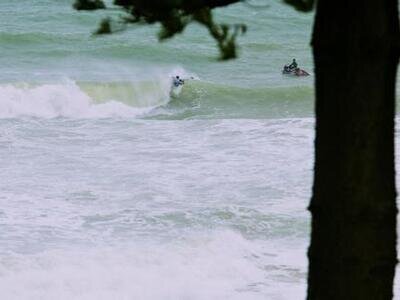 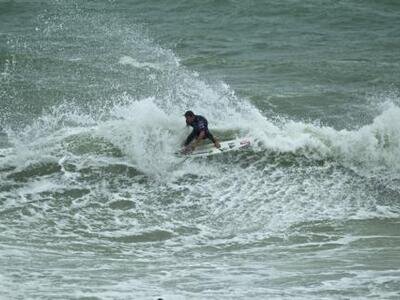 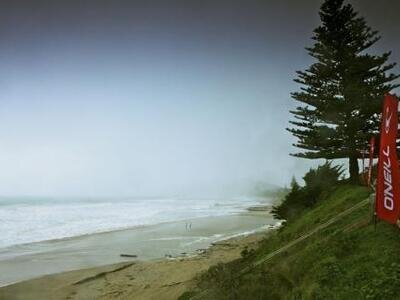 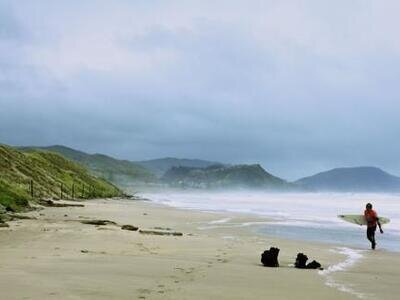 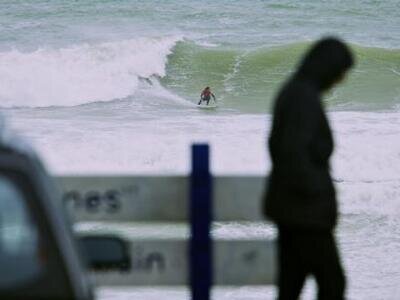