Half Moon Bay, Calif., February 13, 2010 – After more than three months of waiting, contestants and fans alike were rewarded for their patience with an historic day for big-wave surfing, as Chris Bertish etched his name in Mavericks lore and was crowned champion of the 2009/2010 Mavericks Surf Contest.

With waves described by the competitors as some of the biggest they have ever paddled into, and in front of a crowd of approximately 50,000 fans, Bertish outlasted Shane Desmond, Anthony Tashnick, Dave Wassel, Carlos Burle, and Kenny “Skindog” Collins to claim the Jim Beam Jersey and a $50,000 check from prize purse sponsors Moose Guen and Jane Sutherland of MVision and Barracuda Networks. The total prize purse of $150,000 was the largest in big-wave surfing history, with $50,000 going to Bertish, $25,000 to Desmond in second, $15,000 to Tashnick in third, $10,000 to Wassel in fourth, $8,000 to Burle in fifth, and $6,000 to Collins in sixth.

2008 Champion Greg Long summed up the day perfectly while passing along the Jim Beam Champion’s jersey to Bertish. “The entire book of big wave surfing was rewritten today.” Bertish, a native of Cape Town, South Africa was overcome with emotion, adding, “It was an honor just to be here today and paddle out with these other guys. I flew 36 hours to be here, and this has been a dream come true.”

The competitors were greeted by huge waves as soon as the Contest began, with heats one through four being won by Dave Wassel, Peter Mel, Alex Martins, and Ryan Seelbach respectively. “These were definitely the biggest waves I have ever paddled into,” said second-place winner, Shane Desmond. After two memorable semi-finals which were won by Anthony Tashnick and Carlos Burle, the hard-charging Bertish pulled through in the final round.

The Gnarly Head Wines “Gnarliest Drop” Award, given to the surfer who pulls off the most impressive drop of the day, was won by Anthony Tashnick. Commenting on the opportunities that today’s conditions offered, Tashnick said, “There are no excuses on a day like today, it was perfect. Whatever you wanted, you could take.”

The Jay Moriarity Award, given to the surfer who best exemplifies the spirit and passion that Jay was famous for, was won by Dave Wassel. Wassel, who thanked the Half Moon Bay locals for accepting him, was also blown away by today’s conditions. “It was undoubtedly the largest surf any paddle-in contest has ever seen.”

Mavericks CEO Keir J. Beadling thanked everyone involved in the production of the event. “As we all know, producing this event is no easy feat. It takes countless hours of preparation from everyone in the Mavericks extended family. We’re grateful for the support of all who aided in the staging of this event, as well as for all of our sponsors. And congratulations to all the competitors on what was truly an historic day out here at Mavericks.” The full slate of sponsors for the 2009/2010 Contest includes Sony Ericsson, Barracuda Networks, Jim Beam® Bourbon, Moose Guen and Jane Sutherland of MVision, Facebook, the Bay Club, The Corporate Law Group, Gnarly Head Wines, Sierra Nevada Brewing Co., Airship Ventures, Vertical Response, Surfer Magazine, Oceano Hotel & Spa, Stormsurf.com, Rickshaw Bagworks, GoPro, Mission Chiropractic, and Capture Technologies.

About Mavericks™ and The Mavericks Surf Contest®

Every winter season, Mother Nature offers up the ocean’s harshest conditions and the giant, unpredictable waves that characterize Mavericks and the annual Mavericks Surf Contest®. Frigid waters, dangerous currents, jagged rocks and the ever-present threat of the great white shark. When weather conditions are just right, the 24 chosen surfers will make the official contest call. Once the call is made, they will have only 24 hours to arrive in Half Moon Bay to face the extreme conditions, thunderous waves and each other. Coined as "the wave beyond," the Mavericks™ brand inspires hardcore athletes to face the unpredictably raw power of Mother Nature, and stirs the souls of those who aspire to challenge their own limits. Mavericks remains true to its core: a cold, mysterious and foreboding place that demands respect from everyone who goes there and inspires them to attempt the extraordinary. 2009/2010 Contest Sponsors include Sony Ericsson, Jim Beam® Bourbon, Barracuda Networks, Moose Guen and Jane Sutherland of MVision, Facebook, the Bay Club, The Corporate Law Group, Gnarly Head Wines, Sierra Nevada Brewing Co., Airship Ventures, Vertical Response, Surfer Magazine, Oceano Hotel & Spa, Stormsurf.com, Rickshaw Bagworks, GoPro, Mission Chiropractic, and Capture Technologies. For more information, including photos, surf conditions, Official Mavericks™ gear, and contest highlights, visit Mavericks online at www.maverickssurf.com. 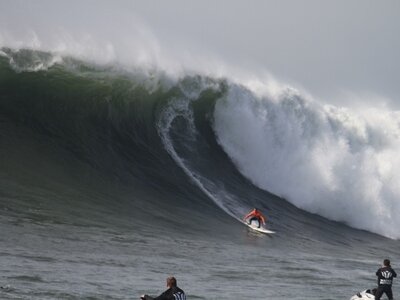