Waimea Bay, HAWAII - Tues. Dec. 8, 2009 - After 25 years with most of those spent waiting, Waimea Bay delivered an event of legendary proportions today at the Quiksilver In Memory of Eddie Aikau, Fueled by Monster Energy. It was 25 years to the day since the first "Eddie" was held and waves of up to 50 feet poured in to Oahu's North Shore as if on cue.

With younger brother Clyde still in the lineup, at age 60, joined by the contemporary top guns of big wave riding, a packed arena celebrated every gutsy ride in brilliant sunshine befitting of a tribute to local hero Eddie Aikau.

When all was said and done, it was California's Greg Long, 26, (San Clemente) who made a late charge in the final heat of the day to claim the $55,000 winner's purse. Long committed to an unbelievable never-say-die attack, securing all four of his top scores - several of them death-defying and one of them a perfect 100-point ride, in macking 40- to 50-foot waves. It was the high point of his career to-date - pretty incredible given that he only rode Waimea for the first time this week.

"I'm so happy just to be here, invited into the biggest event of big waves in the world with all my heroes, I'm so excited," said Long.

"It's a dream come true for me. Riding big waves is my passion and I've been following The Eddie since I knew exactly what it was, I was probably 12-years-old just getting into surfing. Since then, I've had every single poster from Brock Little to Bruce Irons on my wall. I look to those guys for inspiration and to be standing up here with Sunny (Garcia) and Kelly Slater is a dream come true for me. I never would have thought that this is my first year surfing the event and to come away with a victory is really a childhood dream become real.

"I'm still standing here in awe and I want to go check the scores to make sure someone isn't going to come here and take this away.

"It really is about the wave and celebrating the ocean. It's what we do: go out there and ride big waves. The respect and camaraderie in the lineup you don't find in too many places in the world, and this event really encapsulates everything that's great about surfing: the friendships you make in the water and looking out for one another."

The Monster Drop Award, for the most hellacious-but-successful takeoff of the contest, went to Chile's Ramon Navarro, who also finished fifth overall. This is his first time as an invitee into the event. Navarro's winning wave was one of the last of the competition; a huge, seemingly endless drop on his backhand, followed by a detonation of whitewater that he emerged from and then stuck with all the way to the beach. He earned a perfect 100 points.

Navarro first came in 2004 to surf Waimea with an invitation from good friend and fellow contestant today, Kohl Christensen. He baked empanadas and sold them to pay his rent and learn the ropes. Today was pay day. Navarro won $10,000 for the Monster Drop Award, and $2,000 for fifth place. It was a great result for someone who almost didn't surf today after his pregnant wife was accidentally injured on the beach.

"This is a dream for me," said Navarro. "I want to say thank you to Kohl Christensen, Dusty Middleton and all the crew because those are the guys that invited me here and taught me how to surf The Bay. I appreciate everything from these guys."

Nine-time world champion Kelly Slater (Florida, USA), who won here back in January of 2002, placed second after leading the score board from the first second heat of the day. Long turned the tables on him in the final hour of competition. All Slater could do was look on in as much disbelief as the frenzied crowd who were at that point ready to celebrate with anyone. Slater earned $10,000. Third was Hawaii's Sunny Garcia, earning $3,000. Fourth was defending Eddie champion Bruce Irons (Kauai), $3,000.

Navarro's buddy Christensen can lay claim to the most devastating wipeout of the day that remains burned in every mind here today. He also posted several solid scores, but a wipeout like his is as unforgettable as a win.

The call to wait for today and the ensuing result was mind-boggling, especially since many were questioning not running yesterday in 40-foot surf. By afternoon, all concerned were stunned that 79-year-old contest director and big wave icon George Downing had kept his cool so well and timed it perfectly for a second peak in swell energy. The past 48 hours of massive surf is the largest sustained episode to hit the Hawaiian Islands in 40 years.

From the moment the event was declared "on" at dawn, to the final gut-wrenching wipeouts that came with the peaking swell of afternoon, the air was filled with salt spray and adrenaline. Not a square foot of sand or lava rock was empty as a capacity crowd of over 50,000 packed the natural amphitheater of Waimea Bay to experience the pairing of Mother Nature and the men who ride her mountainous surf.

The insane wipeouts that dropped like dominoes, the hairball air drops and perfect scores, the 28 surfers of the event who put their lives on the line in honor of Aikau today - it all made for the greatest day of the Quiksilver In Memory of Eddie Aikau's history.

Waimea Bay's best known big-wave rider and first life-guard, Eddie Aikau, was smiling down on his successors today. Along with the surfers, he would have admired Hawaiian Water Patrol for keeping the lineup and the surfers safe all day yesterday and today. There is no greater collection of guardian angels of the sea than the lifeguards of the North Shore.

Everyone came out in support of Hawaii's big wave gift to the world, including football: The Sheraton Hawaii Bowl, along with the Hawaii Tourism Authority and the Oahu Visitors Bureau came together with support that enabled highlights of the day to reach all four corners of the globe.

Mahalo to Hawaii's Oceanic Cable, who along with the Vans Triple Crown of Surfing took today's action live, all day, throughout the Hawaiian Islands.

FUEL TV will air a one-hour highlight show in the United States: 6:30pm PT/9:30pm ET on Friday, December 11, 2009. The show will re-air several times over the weekend.

The Quiksilver In Memory of Eddie Aikau, Fueled by Monster Energy, is the only ASP sanctioned big wave event in the world.

Visit quiksilver.com/eddie to re-live all of today's incredible waves and wipeouts on demand. 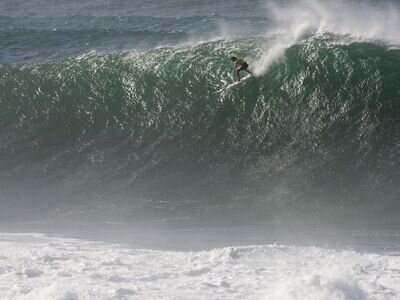 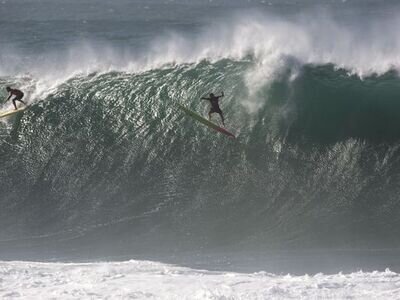 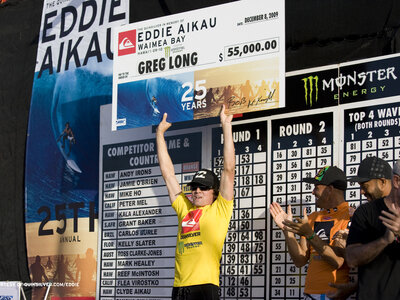 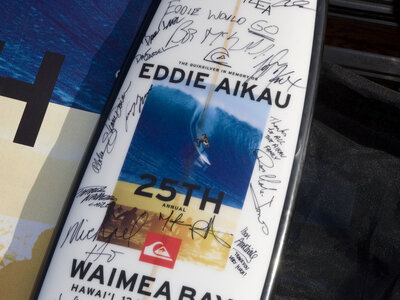 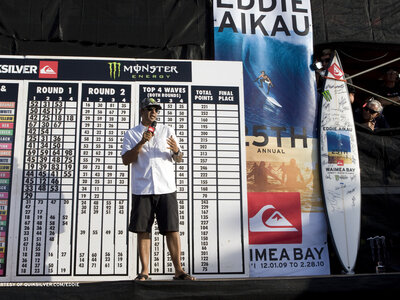 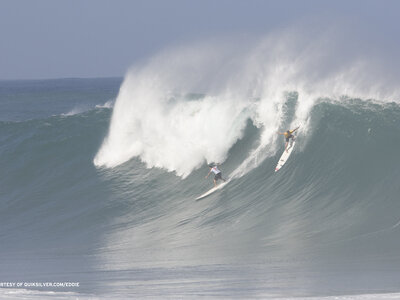 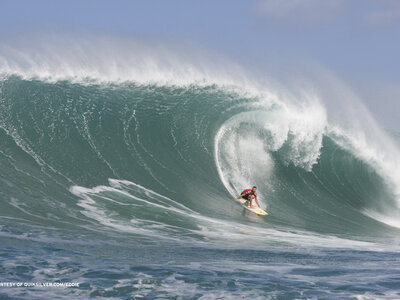 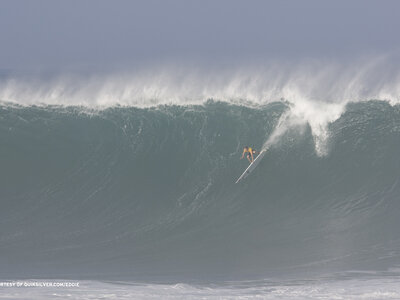