Event No. 7 of 10 on the 2010 ASP World Tour, the Quiksilver Pro France enjoyed a full day of mind-blowing surfing and incredible carnage as the remaining eight surfers were determined in the south of France.

Mick Fanning (AUS), 29, reigning ASP World Champion and defending Quiksilver Pro France champion, absolutely dominated his Round 4 bout this afternoon, threading an endless stream of barrels as well as executing a series of powerful turns to net a 16.93 out of a possible 20.

“I was so excited out there,” Fanning said. “Wave after wave kept coming and I was just being a tube pig. I was being pretty greedy out there. France is always so unpredictable and it changes constantly. The surfers who adapt quickly out here are usually the ones who do well.”

With his Round 4 win, Fanning advances directly into the Quarterfinals, bypassing Round 5 in the process.

“I think it’s pretty crucial to skip that round,” Fanning said. “Not only are you surfing against the guy you’ve drawn, you’re surfing against the round. No one wants have to spend that extra energy on another heat, especially when it comes down to the business end of the event.”

Fanning will take on Jordy Smith (ZAF), 21, in the Quarterfinals of the Quiksilver Pro France.

Smith opened his day by posting a convincing Round 3 win over Gabe Kling (USA), 30, before stumbling in the three-man, non-elimination Round 4.

“It’s a long day surfing with the new format,” Smith said. “It can be pretty exhausting out there. I was fortunate to find a couple of waves that stayed open out there tonight. The rips were changing the conditions fairly quickly. Stoked to get through though and hopefully I can recharge to make a big push tomorrow if we’re back on.”

The current ASP World No. 2 is one of three major ASP World Title contenders remaining in the Quiskilver Pro France, but the young South African remains cautious when discussing the race for the leader spot.

“I’m pretty relaxed,” Smith said. “I think the pressure is on Kelly (Slater) at the moment. I’m just looking at having fun with every heat. Of course I’m thrilled to be where I’m at this season, but there are still a few events left.”

Kelly Slater (USA), 38, former nine-time ASP World Champion and current ASP World No. 1, scored a sensational come-from-behind victory in Round 4 over Michel Bourez (PYF), 24, and Owen Wright (AUS), 20, this afternoon. Unable to amass a score over a 1 at the halfway mark, Slater dropped into a massive righthand barrel only to be spat out and finish with a critical closeout maneuver.

“I heard Michel getting high 7s and I knew I needed 15 points to catch up,” Slater said. “I only had a 1 halfway through the heat then this big bomb came through the spot I was sitting and it put me back in the heat. I thought that was going to be the spot, but I needed the wind do die. Once it did, it was great. I’m on a 5’9” and I don’t think it’s too small. As long as I can catch the waves, I want to be on the smallest board I can.”

As Bourez swam for an equipment change (after snapping his board in half), Slater slung into another barrel before executing a dramatic forehand reverse for a 7.90 and the win.

“I needed to throw something at the end of the heat,” Slater said. “I couldn’t really hear all the scores out there and I knew I needed something. That second barrel probably wasn’t too deep so I tried to finish with an air and it worked out. You play a different game in a man-on-man heat with priority. You would never surf a completely different bank in man-on-man. It cleaned up over there. That little bit of wind. It’s dead glassy now. It’s perfect.”

“To make the Quarterfinals is good for me in France,” Bourez said. “All the people around here are so supportive every time I see them. They tell me that I am supporting France as well. It’s very exciting for me.”

“The conditions have changed a lot since this morning,” Simpson said. “We had nice, clean barrels this morning and now there is a lot of water moving and a lot of rips. I went down the beach and got one of my better scores. I’m stoked. It’s a big heat win for me. I just hope I can have a good heat moving forward.”

Advancing through to the Quarterfinals, Simpson is guaranteed an Equal 5th at the Quiksilver Pro France, a career best for the young Californian.

“One of my goals for the year was to make the Quarterfinals and it’s a huge accomplishment for me today,” Simpson said. “I’m pretty tired just from those two heats today so I probably won’t free surf afterwards, but focus on resting up for tomorrow’s Quarterfinals.”

Ross, who in the opening heat of the day eliminated current ASP World No. 3, Taj Burrow (AUS), 32, would go onto rebound in Round 5, defeating red-hot rookie Owen Wright (AUS), 20. Wright would suffer an absolute pounding in their afternoon affair, snapping three boards in under 30 minutes.

“I’m pretty sore,” Wright said. “That was the biggest pounding of my life. The waves were just pumping. It was pretty surreal. Every time I took the drop was straight down on my backhand. You can’t pass those waves up. If I didn’t go them, I wasn’t going to get 9s and it would have been a crime against surfing.”

Kieren Perrow (AUS), 33, capped today’s action with the highest scoring single-wave score of the day, a 9.76 out of a possible 10 for an incredibly deep barrel and two solid turns. The advancement to the Quarterfinals is a major accomplishment for Perrow, who was awarded the injury wildcard for the back half of the 2010 season.

“You can’t really relax out there,” Perrow said. “I was stoked with that 9-something and really wanted to back it up with a 7 or an 8. However, when two guys have a 9 out there, it makes it really difficult. I’m just trying to relax and enjoy it all year. Even the heats I was losing in J-Bay and Tahiti, I was still having fun even though things weren’t going my way. Now that things are going my way, I’m still having a great time. I’m loving the French barrels and hopefully we get similar conditions tomorrow.”

Event organizers will reconvene tomorrow morning at 7:45am to assess conditions for a possible 8am start.

When competition resumes, up first in Brett Simpson (USA), 25, against Daniel Ross (AUS), 27, in Quarterfinal 1 of competition.

Highlights from the Quiksilver Pro France will be available via http://quiksilverlive.com/profrance2010/ 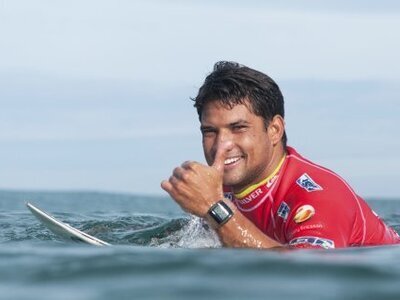 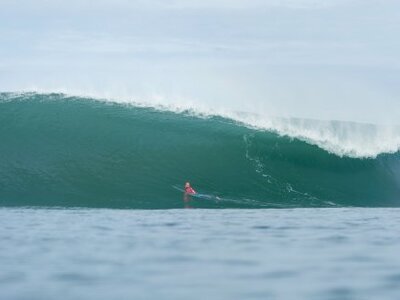 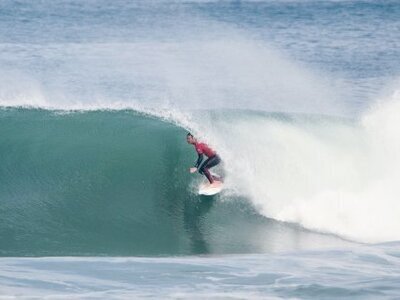 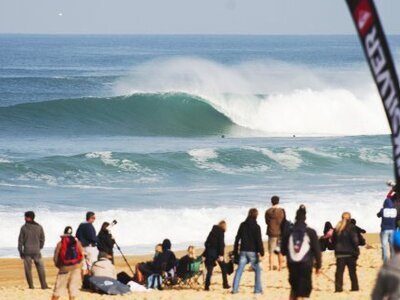 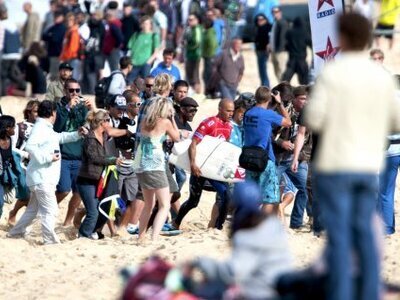 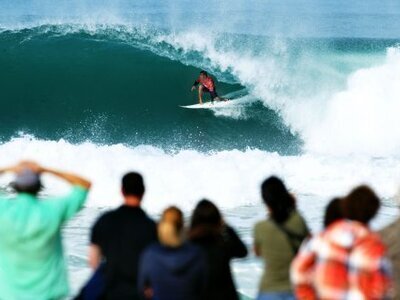 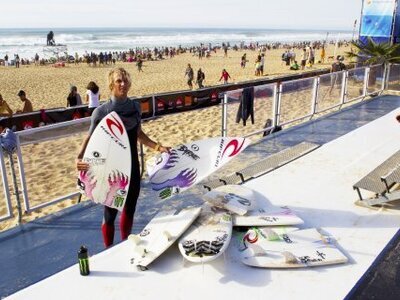 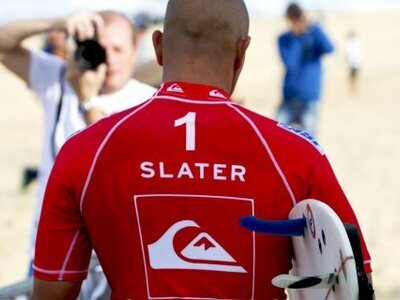