An event that will go down in surfing history, the 2009 Hurley U.S. Open of Surfing was treated to incredible surf (waves reaching as high as ten-to-twelve feet), an unprecedented number of elite ASP Dream Tour competitors in attendance as well as the biggest winner’s prize in surfing history. The young local’s emphatic victory in front of the hundreds of thousands on the beach provided the storybook ending and vaulted the event to unprecedented heights.

Simpson wasted no time in putting his opponent on the ropes in the Final, collecting a 6.83, a 7.83 and a 9.10 in the opening half of the heat with razor-sharp turns, explosive aerial maneuvers and a supernatural rapport with the Huntington Beach sandbanks.

“I knew the tide was coming up and there weren’t going to be as many waves,” Simpson said. “I knew I needed a quick start. We (Mick Fanning and I) both got off to pretty quick starts. We both picked up some good scores off the bat and I was able to build a little momentum throughout my opening waves. I couldn’t believe it when the heat finished – I’m still at a loss. I can’t ask for more than to beat Mick Fanning in the Final at home. With that, and the $100,000 and the 2,500 ’QS points, I’m nearly in tears at the moment.”

Each one of Simpson’s maneuvers was met with a thunder of cheers from the hundreds of thousands of spectators on the beach, and the young Californian’s win was caused an unparalleled eruption of excitement to ripple through the Hurley U.S. Open event site.

“When you’re riding on the ski in front of the crowd and you hear the applause it definitely pumps you up,” Simpson said. “Every time I was feeling a bit tired, the energy level of the crowd would lift me right up. It’s unbelievable to have all the support and my family and friends here with me. This is the best day of my life.”

In addition to taking away professional surfing’s biggest first prize in history (US$100,000), Simpson earned 2,500 ASP WQS points solidifying his campaign in the qualification race for the 2010 ASP Dream Tour. The progressive natural-footer is in excellent position for a berth next season at professional surfing’s most elite level, the ASP World Tour.

“I don’t know what to say,” Simpson said. “It hasn’t sunk in yet. I’m just stoked. It’s my best result ever. It’s so important to my qualifying campaign and such a huge boost of confidence to me. My goal has always been to compete on the World Tour and I’m definitely focused on finishing the season strong. I don’t know what else to say. I’m really excited and I can’t wait for the rest of the year.”

Fanning was in phenomenal form this morning, eliminating two fellow ASP World Tour campaigners en route to his Finals berth, but the current ASP World No. 7 was unable to navigate the decreasing afternoon conditions. Despite missing out on the US$100,000 first prize, the Australian exhibited true sportsmanship, congratulating Simpson as well as the event.

“It’s been an amazing week for me,” Fanning said. “I haven’t been here for seven years and to come back into an event like this is just amazing. The setup, the crowd, the waves, it’s all been a dream. Congratulations to Brett (Simpson), he’s a true champion and we look forward to seeing him next year on tour.”

“I’m disappointed that I couldn’t find the waves against Mick (Fanning),” De Souza said. “It’s still a great event – so many people and good waves, sunny. Obviously, my highlight was beating Kelly (Slater) this morning. There weren’t many waves in that heat, but I was able to get on the better ones and surf pretty well. Kelly can

C.J. Hobgood (Melbourne Beach, FL), 30, current No. 2 on the elite ASP World Tour ratings, was another ASP Dream Tour campaigner to shine at Huntington Beach. A consistent high-scorer throughout the rounds, Hobgood came up short to eventual winner Simpson in the Semifinals.

“I’m so stoked it all came together for this event,” Hobgood said. “All the people and the waves were great. I’m bummed I missed out on the Final, but I had a great week so I’m happy I came here.”

Patrick Gudauskas (San Clemente, CA), 23, who narrowly missed out on qualification for this season’s elite ASP Dream Tour, was another strong Southern California performer at the Hurley U.S. Open of Surfing, finishing equal 5th, further solidifying his position within the Top 10 on the ASP WQS ratings.

The next stop for the men on the 2009 ASP WQS will be the ASP WQS 5-Star Relentless Boardmasters in assoc. with Vans from August 4 – 9, 2009 in Newquay, England.

Barger, reigning ASP World Junior Champion, went on an absolute rampage in the star-studded junior Final, smashing both rights and lefts to net an impressive 15.50 out of a possible 20.

“This is hands down the best contest ever,” Barger said. “Biggest crowd, great waves, lots of sun, big money. Best event ever. I don’t really go out into heats thinking about what I need or what I want to accomplish. I go out to win. That’s what I did out there today and I’m having a great year!”

Highlights from the Hurley U.S. Open of Surfing are available at www.usopenofsurfing.com 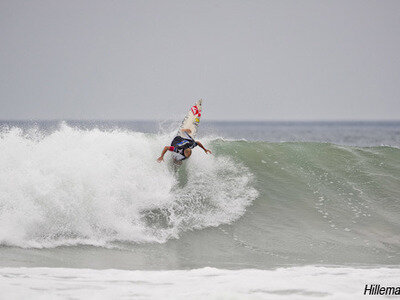