TEAHUPOO, Tahiti (Thursday, May 14, 2009) – The Billabong Pro Tahiti presented by Air Tahiti Nui, event No. 3 of 10 on the 2009 ASP World Tour, has been called off for the day, with only small, two-to-three foot (1 metre) waves on offer at Teahupoo today. “Conditions are small today and too inconsistent to justify running with so much time remaining in the waiting period,” Luke Egan...

“Conditions are small today and too inconsistent to justify running with so much time remaining in the waiting period,” Luke Egan, Billabong Pro Tahiti Contest Director said. “We’re tracking some swell models over the next couple of days so hopefully tomorrow yields more promising conditions.”

Event organizers will reconvene tomorrow morning at 6:30am to assess conditions for a possible 7:30am start.

Surfline, official forecasters for the Billabong Pro Tahiti, are calling for today’s remnants of the WSW swell to fade before a SE swell fills in through the next couple of days. 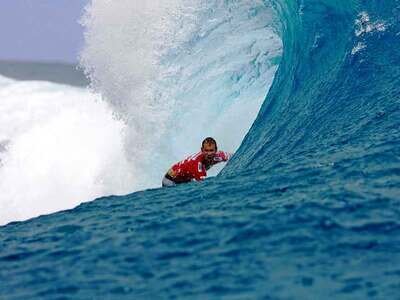