Irons’ defeated former event winner, and 2001 World Champion C.J Hobgood (Fl, USA) in the 35-minute decider, to claim his first tournament victory since 2007. The Billabong Pro, Tahiti win is Irons’ 20th career victory and rockets him to 7th position on the ASP World Tour Ratings. Hobgood is one of the true dangermen at Teahupo’o, but Irons was clearly running hot today, showing the hunger that took him to the top of the sport for three consecutive years.

Hobgood was unable to find the tube rides he needed against the Hawaiian and Irons ran away with the final, winning easily with a two-wave combined total of 14.67 to Hobgood’s 8.33. Irons’ had to overcome his archrival, Nine times World Champion Kelly Slater (Fl, USA) in the semis, which he did so in emphatic fashion, bettering the Floridian’s best two waves by more than three points (13.57 to 10.26).

From there, it was as good as done according to Irons and the 32 year-old heads to stop six, the Hurley Pro, at Trestles, in California – a venue which he has won at before. Slater was not to be outdone however, locking in the Billabong Pro’s only perfect 10-point ride.

Early in his quarter final bout versus Australian, Adrian Buchan (NSW, AUS), Slater once again showed why he is considered the greatest surfer ever, making what many believed to be an impossible wave.

Falling late into a Teahupo’o tube, Slater regained composure and managed to navigate his way to daylight and the screams of disbelief from spectators in the channel.

Slater broke the record books in Tahiti back in 2005 with a similar wave, before going on to earn pro surfing’s first-ever perfect two-wave heat score. The 38 year-old’s excellent third place finish today moved him up one spot to number two in the ASP world rankings, as he heads to the next event at Trestles in California, a mere 250 points behind frontrunner Jordy Smith (ZAF), 22.

Slater has made his intentions very clear for an unprecedented 10th ASP World Title, and he enters the Californian event having won there three of the past five years.

Jeremy Flores (FRA), 22, posted the equal best result of his young career, finishing Equal 3rd at the Billabong Pro Tahiti before going down to Hobgood in the Semifinals. The result jumps the young natural-footer from 24th to 19th in the ASP World Title Race rankings.

Adrian “Ace” Buchan was the highest placed Australian surfer, finishing equal fifth after going down to Slater in the quarter finals.

Billabong's Tiago Pires from Portugal can be proud of his path made upto the quarter finals here in Teahupo'o, Tahiti.In an exceptionally focussed form, "Saca" did not have any easy heats but he consciously took down one by one Taj Burrow (AUS, current world N°3) in Round 1, sent Dean Morrisson to beyond the Top 32 cut-off in Round 3 and defeated Adriano De Souza (BRA, current N°5) in Round 4.

His win in Round 4 was a repetition of Round 2. Despite the tough conditions on offer at Teahupo'o this morning (Sept 3, local time) with mushy waves, dead low tide, and a strong cross-shore wind, Tiago managed to steal the show in the dying minutes of his heat."It was pretty tough out there" Tiago declared "but I controlled my emotions, fought back and finally found this last good wave, which had not closed out making the heat for me"

Boom! 8,33 pts for Tiago , crowning the heat with a solid combined score of 14,83 pts stopping De Souza from being able to come back. In the quarters, Tiago ended up in a similar position against CJ Hobgood (USA) as in the previous heats but that last miracle wave that had crowned almost all his victories never came. However, he's quite happy with this result filling him with confidence for the rest of the tour. 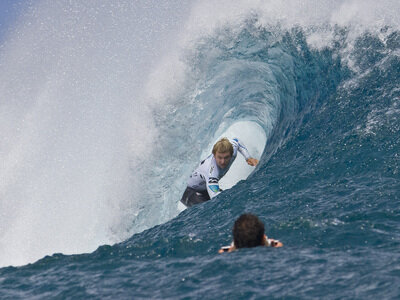 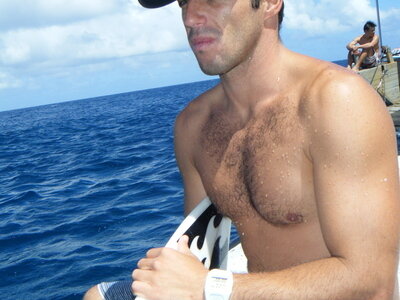 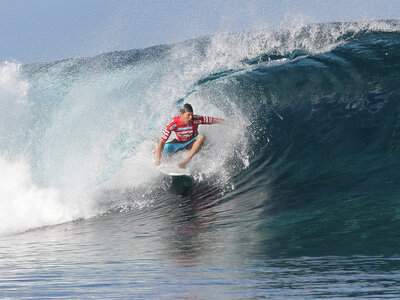 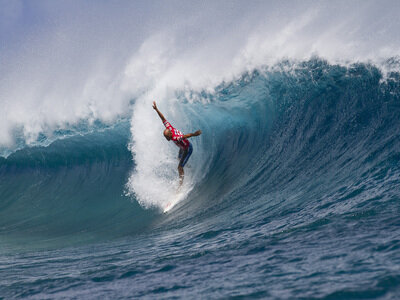 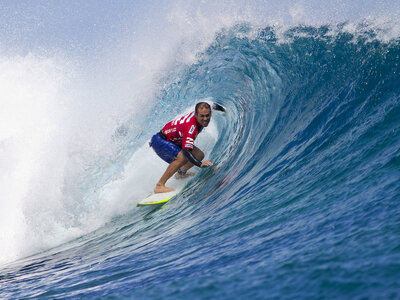 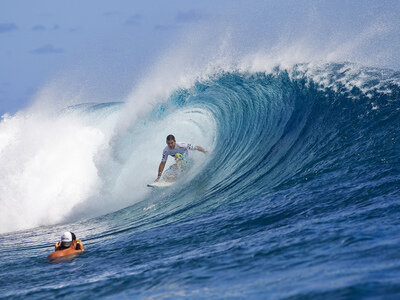 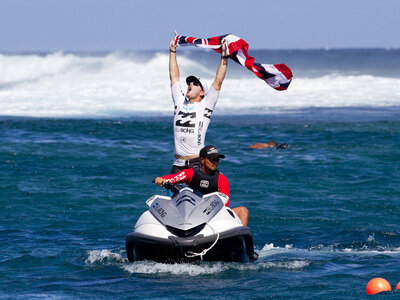