The Roxy Pro got underway in two-to-three foot (0.6 to 1 meter) waves in Biarritz today, the famous Cote des Basques beach allowing three heats of Round 1 to wrap-up through the incoming morning tide before the deteriorating conditions forced things to go on-hold and eventually get postponed until tomorrow’s 8:00 AM call.

Second-to-last event on this year’s ASP Women’s World title hunt, today’s no-elimination round saw top seeds ignite and capture the crowds’ attention with high-level surfing in fast-changing condtions. Day 1 of competition was the stage to a series of close heats with the field of international top athletes focusing on wave selection and both left and righthand options to secure a direct jump to Round 3. Causing the day’s surprise and advancing straight to Round 3 ahead of current ASP Women’s World No. 1 Carissa Moore (Oahu, HAW), Roxy wildcard and former ASP Elite member Lee-Ann Curren (Biarritz, FRA) managed to make the most out of the tricky surf to win her bout and please fans and home crowds.

« I am super happy to make that heat and go straight to Round 3, » Curren said. « I have surfed here since I was a kid and it feels so good to be able to compete in an ASP World title event in front of all my family and friends. Being a wildcard is pretty cool because there’s no pressure but I still want to do well and both Carissa and Melanie are of great inspiration for me so I wanted to perform as good as I could today and it worked out well. »

Curren, with her Round 1 win, added intensity to the ASP Women’s World title race, Moore’s second place forcing her to surf in the second round where a loss would push the world title crowning to the final event next month in California. « I am not thinking of any consequence on the world title race between Sally (Fitzgibbons) and Carissa, »

Curren said. « I am focused on doing well here, I am friends with both girls and I’ll just be surfing my best to get a result in the event. It is my priority. » Netting the day’s highest heat result in the last minutes of her bout against rookie local-raised Pauline Ado (FRA) with 12.15 points (out of a possible 20), longtime ASP Women’s elite surfer Silvana Lima (Rio, BRA) prooved to be in good form unleashing speedy vertical turns on the righthanders to advance through to Round 3.

« I started really slow and Pauline (Ado) was in great form so I knew I had to give it my all to make that heat, » Lima said. « I am feeling great and that board I chose at the last moment worked really well so all is looking good. My knee hurts a little but it’s alright and I am stoked to be in Round 3. »

It took Lima a series of three on-the-rail top turns and full-speed on a walling-up righthander to overcome local Ado who had led the battle since the opening seconds, the multi ASP European champion notching the day’s top signle wave score of 7.50 points (out of a possible 10) but missing the heat win by a mere 0.15 points. When Round 1 recommences, first out will be other ASP Women’s World title contender Sally Fitzgibbons (AUS) up against rookie Laura Enever (AUS) and ASP replacement surfer Felicity Palmateer (AUS). Officials will reconvene Wednesday at 8:00 AM at the back-up venue of La Grande Plage downtown Biarritz. The Roxy Pro could see the ASP Women’s World title crowning this week as Carissa Moore (HAW) and Sally Fitzgibbons (AUS) are the only two remaining contenders. The possibilities are as follows :

Open, this year’s final event This morning, the qualification for the last wildcard to join the ASP Women’s World Longboard Event has been taken by Australian surfer Chelsea Williams. The 2008 runner up will compete in the Longboard main event from Thursday. 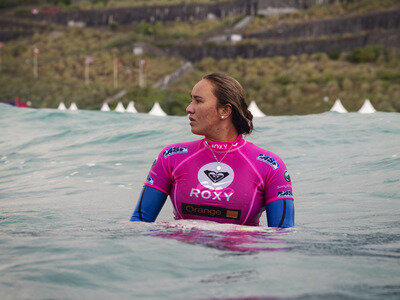 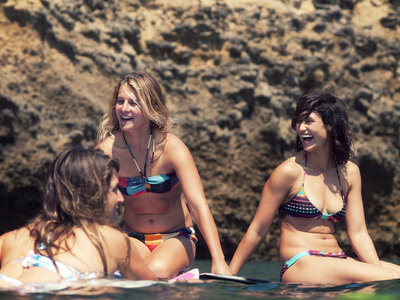 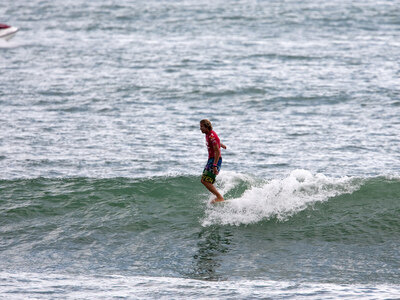 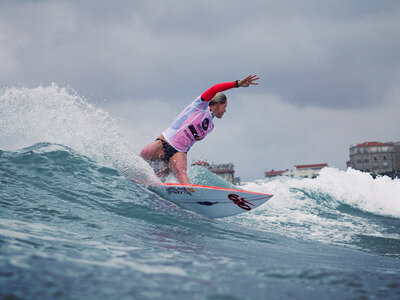