RIBEIRA D'ILHAS/ERICEIRA, Portugal (Tuesday, October 19, 2010) - The Quiksilver Pro Portugal and Association of Surfing Professionals (ASP) sanctioned Men's Star Series event kicked off on day one of the official waiting period with 14 heats of Round One completed at the point break of Ribeira D'Ilhas is clean long peeling rights.

The swell was in the 2-3ft (1m) range with the occasional bigger set pushing down the point. With large tides at the moment a halt was called to proceedings and another afternoon session saw the level of performance surfing increase. Josh Kerr (Gold Coast, AUS) 26, fresh from his victory last week in Canada arrived this morning at Ericeira and after a quick nap, ignited during his heat to score a massive two wave heat total of 18.53. On borrowed boards and feeling good to be back in the water, his opening 9.00 ride shook off any jetlag he may have been feeling and left him in a situation to relax and look for his back up scores.

"I flew over here from Canada and didn't get a wink of sleep. During the break we had at high tide I had a sleep and then straight into it. I am still a bit dazed and confused but it was good to get into the water and feel water on my hands and feet instead of having boots on."

With another excellent score and finishing off with a near perfect 9.53 out of 10 Kerr is on a roll and with the long right-hand point break so similar to his home on the Gold Coast will be hard to beat. "It would definitely be good if I am there at the end with the other top seeds and we can have some really good heats going into the semis and final. That's what I am here for is to try and make the final so see how it goes."

"I'm stoked right now actually," continued Kerr. "I was lucky the waves came to me in that heat and pretty much just had a free surf. I went out thinking of getting an early score and there were plenty of sets and no hassling because it was 4 wave sets and everyone was getting a piece of it."

Hodei Collazo (Zarautz, EUK) 26, was one of the many standout surfers with a heat total of 16.84 out of 20 one of the highest of the day. With many years experience surfing the area under his belt Collazo got off the mark with a series of forehand snaps and carves to claim an 8.67 out of 10 then with another excellent scoring ride on his very next wave, his pass into the second round was assured. "I got lucky out there today. Right at the beginning of my heat a big set came through on the outside and I got my 8.6 and then as I was paddling back out to the peak the other guys were too deep and I got a good one on the inside that was pretty strong. There are not many sets so I am very happy to make the heat."

"I love it here because the waves are great and I have been coming here since I was a kid and competed here many times too. I enjoy it a lot surfing here." Looking ahead to the rest of the event Collazo knows that to do well here demands a surfer
to be in top form and choose wisely his waves. On more than one occasion today the
inclination to move further and further up the point proved fatal. "It is going to be a hard event because there are so many good surfers here and this wave is
so rippable and sometimes there are not many set waves so you can't afford to make any
mistakes and if you want to win here you have to surf the best of your ability and have some luck as well to get the best waves."

Brandon Jackson (Durban, ZAF) 23, was another natural footer who had a dream start to his campaign scoring three excellent rides by laying down a combined series of power forehand smashes. Having only arrived late last night to Portugal Jackson used his water time to adjust to the conditions and in the process show a clean pair of heels to his opponents.

"That was my first surf here in Portugal and this morning I didn't get in a free surf and just watched the other guys in the line-up but it felt good out there for me today. I am still getting used to the water after having just come back from Brazil but it is good to get through that first heat with a win."

"The conditions are kind of amazing at the moment," continued Jackson about the waves.
"There is a light off-shore and a very good set up with really long waves when they come through. It is a bit inconsistent but if you pick the right ones you can get the scores."

When getting off to such a strong start in an event Jackson knows that there is still a lot of work to be done and is surprised to find such a stacked field at the Quiksilver Pro Portugal. "It is all about building momentum at a contest so it is nice to start off like that and hopefully just keep the ball rolling. I came here thinking there wouldn't be too many competitors but it is a really strong field here so it is going to be a good event and really hard."

All eyes were on current No. 15 on the ASP World Title rankings, Jeremy Flores (Capbreton/New Caledonia, FRA) 22, as he made his debut appearance in the opening heat
of the Quiksilver Pro Portugal. In a relaxed battle Flores cruised through to the next round with a couple of solid scoring rides on the glassy early morning rights. Having had a break from surfing since his recent excellent third placing in Peniche, the 25-minutes spent getting back into rhythm were invaluable.

"It feels great to get through this first round especially after I haven't surfed since my last heat in Peniche last week. I was feeling really bad out there and the wave was a little soft and with the off-shore winds made it hard. I should have had a least a few free surfs the last few days. It would have made me a lot more confident. (laughs)" A major part of his heat win came down to his knowledge of the Ribeira D'Ilhas set up.

Positioning and wave selection were the secrets to an easy advancement into the following round. "The sets are good if you can take off from the inside but from the outside you cannot really make it so the medium and small ones can go along the reef. I've known this since I was about twelve years old and I have been screwed out there so many times waiting for the big one and never working out so my memory of the spot has helped out." Alan Stokes (Newquay, GBR) 29, came out on top of a stacked heat which sure the elimination of promising young Australian Davey Cathels in a tight finish that saw Stokes take the lead and Demitri Ouvre (FRA) take second place on the final siren. "I knew Davey (Cathels) could surf good and he looked like he surfs points as well," stated Stokes. "So I was just trying to ignore him and just stick to my own game plan. We didn't have that many waves and I fell on my first one so I was kicking myself and that set me up for my next wave and I got a good score."

Explaining his winning ride Stokes made the point that it is not as easy as it looks and that physical fitness plays an important role at Ribeira D'Ilhas.

"It probably looked quite good from the beach but when you are on them they really burn your legs. The first part of the wave you have to work hard and then the thing speeds up on the inside and you can actually do some good turns. Your legs start killing you so you are just holding on to do that last turn."

Surfers competing in the Quiksilver Pro Portugal are out to claim valuable ASP World Ranking points in their endeavour to qualify for next year's elite ASP World Tour. European surfers are on stop nº 10 of 12 in their bid to claim this year's European Men's Title which is currently being lead by Marc Lacomare (FRA). 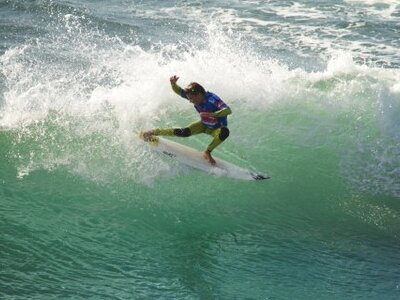 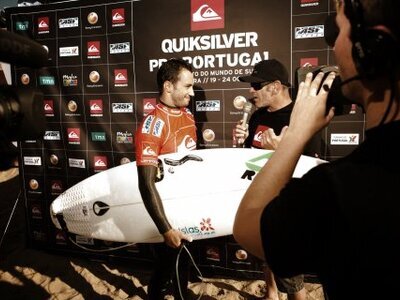 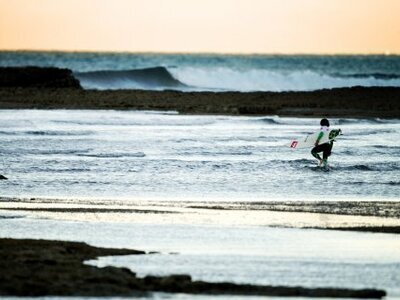 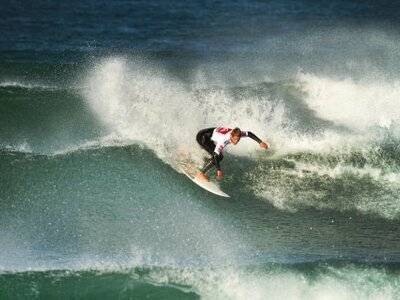 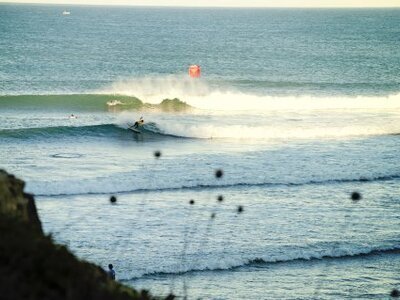 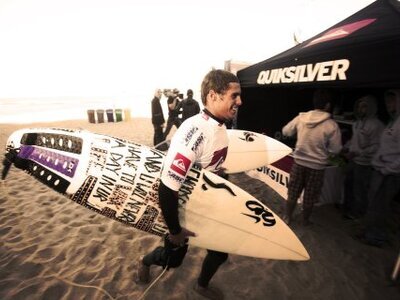 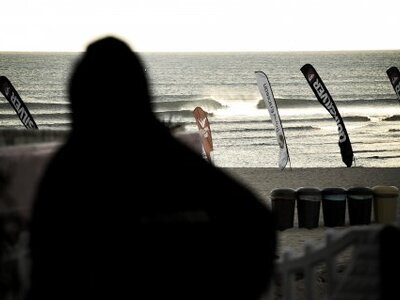 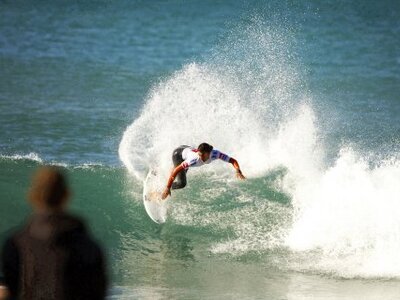